Tapping into the power of the wind

Tapping into the power of the wind 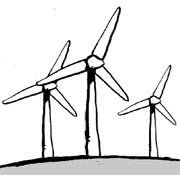 Since time immemorial, wind has been something more than just an atmospheric phenomenon.

In his book, “The Conscience of Words,” Elias Canetti, the 1981 Nobel laureate in literature, said that wind was one of the oldest forms of mythology, that the entire human race paid attention to wind and that ghosts and gods alike would never enjoy the kind of attention that is reserved for the wind.

The life and death of human beings follows a similar philosophy. When a person passes away, a piece of thin paper is sometimes placed on the nose to confirm whether the person is still breathing.

It was in this context that Gaston Bachelard, a French philosopher, tried to link the wind with the breath. “For the world, it is the wind, and for human beings, it is the breath that takes the spirit far away and connects it to the power of the universe,” he said.

For Korean people, art appreciation, or pungryu, is another form of wind. The poet Seo Jeong-ju, who had a deep love for art, said, “Eight-tenths of the energy that has supported me in the past 23 years has come from the wind of art.” He also said that “although the word pungryu is often used to say that something is wonderful, it is no doubt also used in connection with the flow of the wind.”

Therefore, pungryu is not simply the style and grace of an artist. It means that one lives in a universe that breathes with the flow of the wind, uniting the two.

When Korean people express pungryu, they do so through sinbaram, or excitement. This is a force so strong it has the power to unite the people as one. The original forms of sinbaram were expressed through farmers’ music and dance and shaman rituals.

Right now, the wind blowing through Korea is borne by the Taegeuk Warriors, who defeated Greece in the World Cup on Saturday. We hope the wind will soon become a strong gust that sends the Korean team into the round of 16.

These days wind not only inspires, it also brings money. People predict that the size of the world’s wind power industry will exceed that of the shipbuilding industry in two years. To get a jump on that, Korean businesses in the wind power industry plan to have talks with leading European companies in that sector at the “Global Partnership EU 2010” in Hamburg, Germany, on Tuesday and Wednesday.

I hope that a little Korean pungryu will blow through Europe for the duration of the talks, enough to carry Korean companies into the world’s wind power industry.