She’s fitting in by standing out

She’s fitting in by standing out 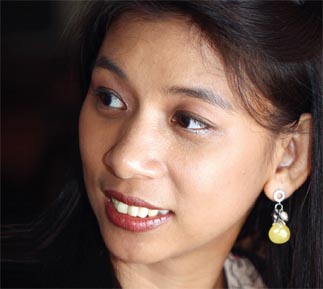 She comes from a good family, was a medical school student and placed third in a beauty pageant - things that most people would consider first-class accomplishments. However, as a Filipino woman, Jasmine feels like a second-class citizen in Korea.

“I was perhaps the most eligible girl in the Philippines, but in Korea, I wouldn’t even be considered as someone’s wife,” she said.

Before she came to Korea with her husband, Jasmine Ba had always been the belle of the ball. Her nickname was “palengke queen,” or queen of the market, because her family owned the biggest store in the marketplace.

She had four maids and more than six cars at her disposal.

In academia, she excelled at everything she touched. On the Filipino college entrance exams, she received a score of 99 points out of 100 and was accepted to the National University of the Philippines, the country’s most prestigious school. But her parents did not want her to go too far away from home to study, so she went to Ateneo de Manila University medical school, one of the country’s best schools. 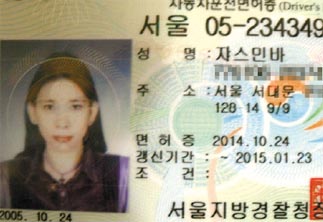 Jasmine39s Korean driver39s license, on which her name is registered as Jasmine Ba. Provided by Jasmine Ba

While she was at university, she competed in the Miss Philippines regional beauty pageant in 1994, in which she came in third, and was the lead vocalist in her school’s band.

Her life changed later that year, when she met Lee Dong-ho, who worked on a ship as second mate, near her hometown. Lee had gone into one of Jasmine’s family’s stores and the two fell in love almost instantly. After six months, he quit his job and moved to the Philippines so they could be together. Although Jasmine’s parents were initially resistant to the idea of their daughter dating a foreign national, they were eventually won over by Lee’s persistent displays of affection for Jasmine.

Her friends, however, were not as accepting.

“My friends kept asking why I would be with a foreigner like him,” said Jasmine. “They would also remind me that he is not Caucasian and not fluent in English.”

The two were able to overcome these obstacles, and they married in April 1995. Although Jasmine wanted to stay in the Philippines to finish her studies after her marriage, the discovery that she was pregnant led her and Lee to decide to move to Korea to be near his parents.

The couple’s first son, Seung-geun, was born in July 1996, when Jasmine was 19 years old. She had to give up her college education but thought that her outstanding report cards and entrance exam scores would allow her to transfer to a Korean university. But this time, her efforts were not successful.

In May 2000, she gave birth to a second child, a daughter they named Seung-yeon.

Three years after moving to Korea, Jasmine decided to apply for Korean citizenship. She ran into trouble when she had to fill in the application form.

“The lady at the town community center explained that my full name could not fit into the space available,” Jasmine said. 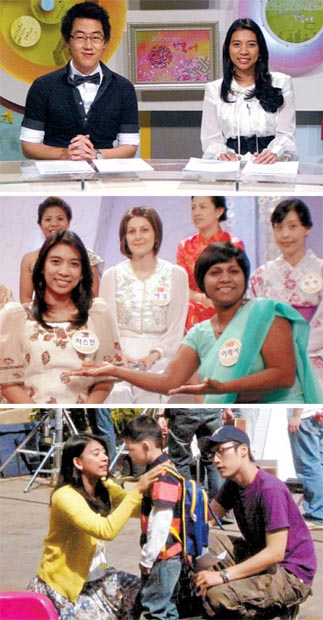 Jasmine appeared in a Korean language program for expats here on the educational TV channel EBS, top, and KBS1 TV channel’s “Love in Asia” program, center, which feature the stories of marriage immigrants. She also appeared in a public campaign ad about multicultural families, bottom. Provided by Jasmine Ba

Although she appealed to have them accept her full name, she was told no exceptions were allowed, so she ended up having to shorten her last name to “Ba,” the name she uses today.

But that is just one example of the struggles she has gone through to adapt to life here.

She frequently endures stares and whispers from strangers, even when she is running errands in her own neighborhood.

“Koreans tend to blatantly stare when someone looks different from them,” said Jasmine. “That makes me really uncomfortable.”

Just after she had received her identification card, she encountered a middle-aged Korean woman who would not stop staring at her when she was on the bus on the way to the market. The woman even started following her.

When Jasmine said “Hello” to the woman in polite Korean, the woman answered using one of the lowest forms of speech, rather than the polite form typically used with strangers. Her tone indicated that she thought Jasmine could not understand the language.

Jasmine explained to the woman, in Korean, that she is from the Philippines and understood what the woman was saying. 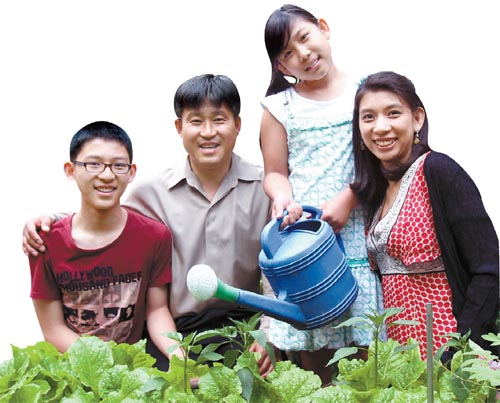 Jasmine’s family at her home. By Kang Jung-hyun

In response, “She not only insulted my country, saying that it is just poor and that she had to watch her bags when she went there to visit, she didn’t even use the proper form of address that you would normally use when talking with a stranger,” Jasmine said.

“She even accused me of coming to Korea through a marriage arranged by the Unification Church. That was a question which I got often during the late ’90s.”

Although many Filipino women have come to Korea through marriages arranged by brokers, the church, which is known for “mass weddings” uniting thousands of people, has arranged such marriages for these women in the past.

Even Jasmine's explanation that her marriage had not been arranged was not enough to satisfy the stranger. The woman still looked suspiciously at her, and asked if there was a large age difference between Jasmine and her husband.

The terms “marriage migrant” and “international marriage” began to be used more frequently during the latter half of the 1990s, when the number of foreign women settling in Korea through marriages to Korean men rose dramatically. As the number continued to rise, perceptions of Southeast Asian women in Korea grew increasingly negative.

The bias presented significant obstacles for Jasmine as her son got older.

When her son started school in 2002, Jasmine would not go to the school to drop him off or pick him up because she did not want anyone to know that her son, who looks Korean, is biracial.

“After 2003, there were reports about children who were ostracized because they were from ‘multicultural families.’ Since the term ‘multicultural families’ began to be used widely in Korea around 2003, I’m sure that the reports from before that time would have referred to biracial children as ‘half bloods,’” said Jasmine. “Neither label feels like it is adequate to describe any of our situations.”

She added, “Using the label ‘multicultural families’ is like giving us another racial classification. That one phrase creates hundreds of barriers.”

In 2004, at the urging of her son, she visited his school to do volunteer work handing out lunches. The other mothers thought that Jasmine had been hired to do the work in place of Seung-geun’s real mother. The other two Filipino women Jasmine had met in her town were housekeepers, and the Korean mothers did not think of her as an exception.

For a moment, Jasmine said, “I wished that I was Caucasian and thought about the things my friends said to me before I got married. I guess racial discrimination is something inevitable for any culture.”

But then Seung-geun yelled “Mom!” and everyone stared at her and her son. From then on, Jasmine decided she would not live in the dark anymore.

“I participated in a housewives singing competition that had a special section for housewives who are foreign nationals in Korea in 2006. Since then, many programs have called me to ask me to appear.”

The year 2006 changed things for Korea. That was the year Hines Ward, who is half Korean and half African American, was named the Super Bowl’s most valuable player. Ward’s subsequent appearances in Korea and advocacy for the rights of biracial Koreans slowly began to change Koreans’ perceptions of mixed-race people. Some of the changes include the policies that previously exempted people from multiracial families from serving in the military.

Things changed for Jasmine, as well. After 12 years of restricting her talents to the home, she started to spread her wings into society. She began to do translation work and worked as an English teacher. These days she translates interviews and video clips for a documentary on the Korean War. She is also working with EBS teaching Korean to foreigners and works as a regular panelist on the KBS-TV program “Love in Asia.”

Most recently, she snatched up a role in the hit movie “The Brother,” in which she played a Vietnamese marriage migrant who runs away from her husband.

In 2008, the Center for Korean Women and Politics called various TV broadcast stations to give recommendations for the organization’s first “migrant woman regional representative” project. This project did not receive much support until 2009, when President Barack Obama, who is also biracial, became president of the United States.

“The center sent out resumes to various political parties. I’m not really sure of the process,” said Jasmine.

As Jasmine Lee, she was supported by the Grand National Party for a seat on the Seoul Metropolitan Council, “but I wasn’t included in the final list.”

“Although I didn’t get a chance this time, it really sparked my interest in politics,” she said.

Just the fact that an immigrant woman could participate in Korean politics has inspired many others like Jasmine. And with that inspiration, support for her has grown.

“I asked myself, ‘What do we need, what can we do for this society, who is going to represent us, what can we change?’

“And I thought, ‘if this is what politics really is, I think I can do it,’” she said.

Jasmine’s lifelong dream was to become a musical actress. With her background as a singer in a band and her experience as an actress, it is just one more thing that she could achieve.

“I want to do anything I can in Korea,” she said. “All my efforts have a purpose. I want to make a society that doesn’t need to classify my family as ‘multicultural.’”