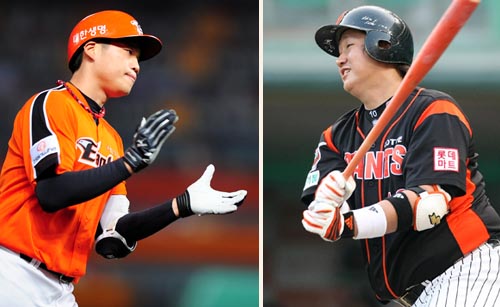 Choi Jin-hang of the Hanwha Eagles and Lee Dae-ho of the Lotte Giants currently lead the league in home runs, with 20 apiece. [JoongAng Ilbo, NEWSIS]

Will baseball fans be treated to a slugger who hits 40-plus homers for the first time in seven years?

With about half the season in the books, Choi Jin-hang of the Hanwha Eagles and Lee Dae-ho of the Lotte Giants are currently tied for the lead in home runs in the Korean Baseball Organization, with 20 apiece.

As the two sluggers battle for the honor of being named the top slugger of the 2010 season, there’s a strong chance that one or both of them will end up with 40 or more home runs.

As a six-year veteran, Choi earned a spot in the starting lineup at the start of the season. He struggled early on but has been playing the best baseball of his career of late.

He hit nine home runs in May to shoot to the top of the home-run race, and he has continued his strong pace with six home runs so far this month.

Not even Choi himself could predict such a strong showing; he’d set a modest goal of hitting 20 home runs this season.

Lee has been even hotter than Choi. The Lotte first baseman has hit a homer in each of his last four games, and has swatted 10 dingers so far this month.

Playing in the spacious Sajik Stadium in Busan is considered a disadvantage for home run hitters, but Lee has learned to use the opposite field this season and as a result, he’s on pace to hit more than 30 home runs for the first time in his career.

If the two sluggers keep up their torrid pace, this could be the first time a single player hits more than 40 homers in a season since Lee Seung-yeop of the Samsung Lions set an Asian record with 56 home runs in 2003.

No other hitter has been able to come even close to that feat since then. When Lee Dae-ho won the 2006 home-run title, he managed only 26.

Choi and Lee have played a total of 68 and 69 games, respectively. At that their current pace, Choi is projected to hit 39.1 home runs, and Lee another 38.6.

Players often tire, though, and their production drops off as the season wears on, so it won’t be easy for either slugger to reach the magic 40 milestone.

But the close race in which the two sluggers are locked could actually serve as a motivational factor.

In 2003, Lee Seung-yeop spent the season neck-and-neck with Shim Jung-soo. One pushed the other to their spectacular final tally: Lee 56 home runs, Shim 54.