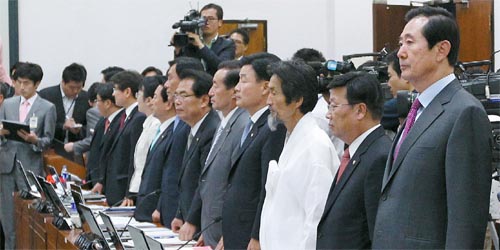 Lawmakers stand to vote down the passage of four bills revising the Sejong City project at the National Assembly’s Committee on Land, Transport and Maritime Affairs. The committee voted against the revision, which would have turned the South Chungcheong region into an education, science and corporate hub, by 18 to 12. As a result, a former plan to move government offices to Sejong City will proceed. [YONHAP]


President Lee Myung-bak’s attempt to stop Sejong City from being made into a mini-capital and to transform it instead into a hub for education, science and corporations was dealt a deathblow today as the National Assembly’s Committee on Land, Transport and Maritime Affairs voted down his proposed legislation.

Song Kwang-ho, head of the committee, said four bills were rejected by a vote of 18 to 12, with one abstention.

“I and 1.5 million North Chungcheong residents welcome the results that reflected the public’s sentiment in the June 2 local elections,” said North Chungcheong Governor-elect Lee Si-jong of the Democratic Party. Sejong is in neighboring South Chungcheong. “[The committee’s vote] brought an end to a long-lasting conflict and many controversies surrounding the project. We will soon map out strategies to lure companies that wanted to invest in Sejong City.”

The original Sejong City plan, put forward by Roh Moo-hyun during his 2002 presidential campaign, was to relocate the national government to the city. The country’s Constitutional Court ruled against Roh’s plan, saying the country’s capital could not be moved, and the president scaled it back to move many, but not all, government offices. That plan was passed into law in 2005, and the laws are still on the books.

After being elected in 2007, Lee said he would scale down the plan further to make Sejong an industrial, science and education hub.

Opposition parties, as well as Grand Nationals loyal to Lee’s political rival Park Geun-hye, fiercely opposed the revision, but this March the cabinet submitted four bills to push it through.

After the ruling party suffered a defeat in June 2 local elections, in which Sejong was a big issue, Lee said he would abandon his plan, and asked the National Assembly to make the final decision on its fate.

Following the committee vote yesterday, Grand National Party lawmakers loyal to Lee said they will try to get the entire National Assembly to vote on the bills.

According to the law, a vote by the entire assembly is possible if 30 lawmakers request it, even after bills are voted down in committee.

“Some 80 GNP lawmakers support the idea to request a vote by the entire assembly,” said GNP Representative Cha Myeong-jin, adding that the GNP wants the vote to take place next Monday or Tuesday.

The odds of the GNP actually passing the legislation in the assembly are low. Political observers estimate that there are around 120 lawmakers, including independents, who are likely to vote for the revision bills, but over 170 - including pro-Park GNP members - who will vote against.

Lee Hoi-chang, head of opposition Liberty Forward Party, said that the GNP would be contradicting the president’s assertion that he had sent the Sejong decision to the assembly if the GNP doesn’t respect the committee’s vote and tries to get the bill on the assembly floor.

“If the Lee government insists on putting it to a vote in the assembly, that’s lying to the public.”