Taste the slow life with these Korean food specialties

Taste the slow life with these Korean food specialties 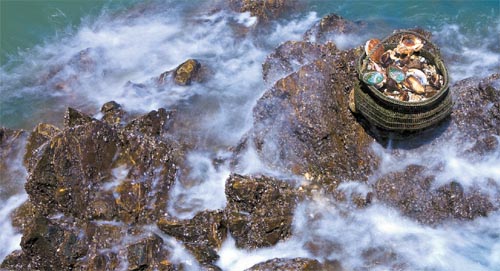 Fresh abalone from Cheongsan Island, HOTEL EVENTS which is one of six designated slow cities in Korea. By Kwen Hyek-jae

Go Soon-shim, a 55-year-old haenyeo, or female diver, and a native of Cheongsan Island, South Jeolla, boasts about the quality of the abalone found there.

“Abalones move from rock to rock and live on seaweed. So it is only natural that if the things abalones eat are clean and natural, the abalones are as well,” Go said pointing to the water. “Look at this water, it is emerald colored.”

On our ship, the Sinae, a two-hour-long talk on abalone and food followed. The divers started off at 7:00 in the morning to catch abalone but had been looking for two hours for a spot in the sea with calm waves. At around 9:00, our ship found a spot to settle at, where the haenyeo jumped into the water like dolphins. The abalones they found were fresh and smelled of the clean sea.

Cheongsan Island is one of the six designated slow cities in Korea. The slow city movement, officially called Cittaslow, originates from Italy. In the Cittaslow movement, towns adapt a slower lifestyle to live in harmony with their natural surroundings.

The movement has grown on an international scale and is gaining more attention by the day. Tomorrow will see the start of the 2010 International Cittaslow Assembly of Corea Invitational, a general assembly of Korean slow cities that has been held annually since 2008. This year, the meeting will take place at the Seoul Museum of History.

I left on a trip to discover “slow” food in Korea’s designated slow cities. The types of food I mention are representative of the foods grown or found in these regions. Contrary to the theme of the trip, it was a hectic journey around six cities in just four days. Despite my jam-packed schedule, however, encountering fresh, “slow” food made my attitude toward the schedule a bit more forgiving.

Hadong is the first place in Korea to have started planting tea. The town of Agyang in Hadong was designated the first slow city in the world with a tea plantation area. Surrounded by Mout Jiri’s Seongjae and Chilseong peaks, the town is protected from excessive wind and is relatively warm during the winter, making it a great spot for tea cultivation.

There we found Maeam Dawon, a tea museum complete with a tea cafe. For only 2,000 won ($1.70), you can order a cup of tea and enjoy the view from the garden.

“We grow our tea trees without using any pesticides or chemical fertilizers. All the tea is grown organically,” said Gang Dong-oh, 43, head of the museum. Gang added that one of the prize tea varieties that came from this town is a fermented tea called tteokcha. To make it, the tea leaves are steamed, ground and then fermented for three to five years. Although fermented tea doesn’t have the crispness of non-fermented teas, it has a deeper, subtler flavor. 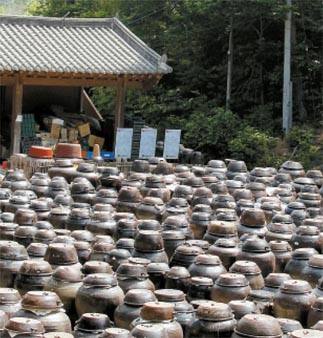 Soy sauce made by Ki Soon-do, who has earned the designation of master from the agriculture ministry

In Changpyeong, there are three slow food masters. Ki Soon-do, 61, makes aged soy sauce and has even attained the title of “master” from the agriculture ministry through this food. The aged soy sauce she makes is fermented for five years in a pot, with the lid firmly shut. In front of Ki’s house, there are over 600 pots full of soy sauce. When I opened one of them and looked inside, the sauce was much darker than ordinary soy sauce.

“I look after this soy sauce as if it were one of my children,” she said.

For Ki, the most important elements for quality soy sauce are the water and salt used. She said that she only uses bamboo salt from Damyang bamboo trees as well as natural bedrock water from 150 meters (492 feet) below the sea in Changpyeong.

Another Changpyeong native with the title of master is Yu Yeong-gun, 61, who is recognized for his rice taffy. Surprisingly, his taffy, made only with rice and taffy oil, doesn’t stick to your teeth and has a crispy texture.

The last master we met in the town is Park Sun-ae, 54, who makes traditional Korean desserts using rice. First, she puts rice in water and leaves it for a week, and then she steams and grinds the rice, adding grain syrup and natural food coloring. 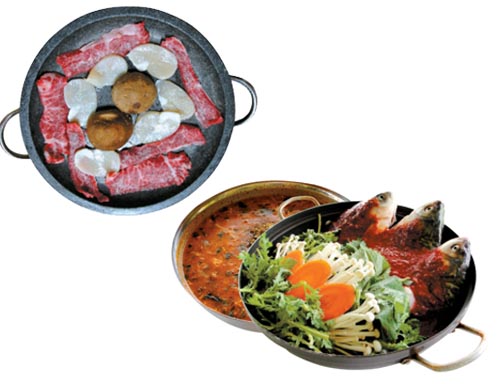 In Yuchi, shiitake mushrooms live hidden in the town’s scenic mushroom plantation, with the Jangheung dam in the front and Gaji Mountain behind. Only the sound of birds and flowing water can be heard where the mushrooms are grown. Like at Hadong, the mushrooms in Yuchi are grown organically. The town’s most famous dish incorporates these mushrooms, beef and fan mussels. The ingredients are grilled and eaten together.

Daeheung is the home of Yedang Reservoir, the biggest freshwater lake in the nation. The reservoir’s clean, fresh water makes the town famous for its bungeojjim (steamed carp) and eojuk (fish porridge). We walked into Yedang Garden, one of the more famous fish restaurants in the area.

“We throw out a fishing net around 7 p.m. every day and we catch a lot of carp in the net by the next morning. We use freshly caught fish in our cooking,” said Yun Gi-ja, the owner of the restaurant. Yun added that they also cultivate their own vegetables. The bungeojjim, which is made by boiling a fresh carp with white radish, green onion, garlic and red pepper paste, had a very smooth texture and a spicy and tangy taste. The eojuk, which was also highly nutritious, was made with carp, eel, fresh water shrimp and was boiled for three hours with highly valuable medicinal herbs. It had a rich, full-bodied flavor. 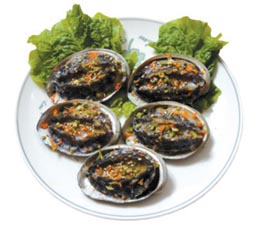 As soon as you hop out of the ship at Cheongsan Island, you will see an endless row of seafood restaurants and fisheries markets selling fresh seafood. In this area, the abalone should be first on your list of things to eat. While most people think only of abalone porridge and abalone sushi, you will be surprised to learn that much more can be done with abalone.


Jeung Island is famous for its sun-dried salt. According to Jung Yeong-jin, an officer at Jeung Island Slow City, the place was designated by Unesco as a Wetland Reserve and its mudflat has a copious amount of minerals. As a result, the salt itself also has an abundance of healthy minerals.

“We are confident about the quality of our salt. It is comparable to the gray sea salt from the Guerande region in France,” Jung added.

We tasted the salt crystals at the salt farm and surprisingly, it tasted salty at first but a subtle sweetness followed. It was not bitter at all.

Salt is not the only slow food that has made Jeung Island famous, however. Clam soup is the dish most recommend by Jeung Islanders. We visited Gaetmaeul Restaurant, which is famous for its clam soup. There, the clams and leeks are boiled together without any seasoning.