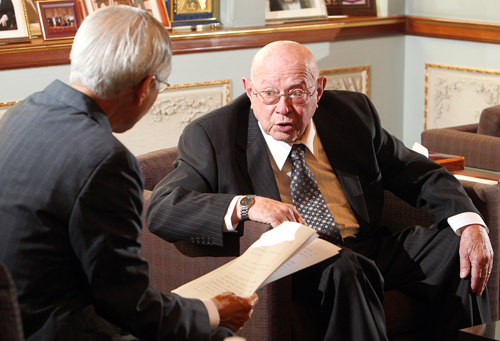 Robert Scalapino, right, the founder of the National Committee on United States-China Relations, has an interview with Kim Young-hie, left, editor-at-large of the JoongAng Ilbo, Tuesday at the JoongAng Ilbo building. By Kim Tae-seong


A U.S. expert in East Asian politics says there’s little chance that North Korean leader Kim Jong-il was unaware of his country’s attack on the Cheonan warship, and he must have been “intimately” involved in the plans to attack.

Robert Scalapino, the 90-year-old founder of the National Committee on United States-China Relations, also said in an interview with Kim Young-hie, an editor-at-large of the JoongAng Ilbo, that Pyongyang’s nuclear ambitions are a danger that isn’t confined to Northeast Asia, but a global issue that can complicate the political dynamics in countries as far away as Iran.

Q. Inter-Korea tensions are reaching a height unseen for years. I have a point-blank question - who masterminded or ordered the sinking of Cheonan? And why?

A. This is an important question. And one that has to be handled carefully. There is no doubt that Kim Jong-il is in a position to exercise major power. He’s built up before his people as a superpower individual and the son of the all-powerful. But it’s also my opinion that certain key individuals have very striking power ... I am certain that Kim Jong-il was intimately involved in the decision.

So you think the attack was impossible without his knowing about it.

The South Korean government is under great pressure from conservatives to teach North Korea an unforgettable lesson by taking painful punitive actions against it. Has the United States made its opposition clear to any level of military action by the South?

I don’t have any access to secret information. But it is my view that the Obama administration will seek out all means to prevent an outbreak of military actions. First of all, we remain involved in two costly wars in Iraq and Afghanistan, and our people do not want to get involved in another conflict. Secondly, I think the Obama administration’s desire is to find a way to get the world to cooperate in placing certain restrictions on North Korea’s actions and policies. It’s not sufficient to have just the U.S.-South Korea alliance in this situation. That means not just six party talks, but also others - Korea’s neighbors in Asia and the rest of the world must come to some kind of agreement that will put additional pressure on the North.

China is a dilemma for us. We feel like accusing it of singularly defending North Korea when the latter engages in provocative actions that destabilize the region. But we can’t afford to alienate China. We have no leverage, diplomatic or economic means, to make China behave as a responsible regional power. What advice would you give to South Korean policy makers about our China policy?

In my opinion, it is appropriate for South Korea to continuously urge China to seek a means of changing North Korea’s behavior, internationally as well as domestically. At the same time, I think South Korea should note that the Chinese are not wholly supportive of North Korea. As a matter of fact, as I indicated, there are many incidents that they criticize and put pressure on the North, but they don’t want the North to collapse. Consequently China would resist the kind of absolute pressure that can cause the North’s economy to collapse or create a chaotic situation on its border. And I think South Korea can appreciate that. It’s possible for Seoul and Beijing to work together to some extent and find a means - collectively and individually - of influencing the North.

In your thesis and books, you label North Korea an hereditary monarchy whose leaders are endowed with supernatural qualities and are virtually worshipped. But this is an age of information technology and spectacular communications advances. In this context, will there come a time in the foreseeable future when this policy of keeping the populace in the dark becomes inoperative? Would it be wise for us to do something to hasten the process?

I think this is likely. And I think this is already worrisome to the North Korean leadership. I think South Korea should inform North Koreans of the real world of external factors that are increasingly going to affect them. I realize that the North Korean leadership will define this as hostile propaganda and dangerous information. But it is a duty of the South Korean people and government and non-official institutions to try to communicate critical issues. You need to be more active with the dissemination of information and ideas, not in a hostile fashion but presented as informative action. I think that’s worth it.