Veterans return to a changed landscape

Veterans return to a changed landscape 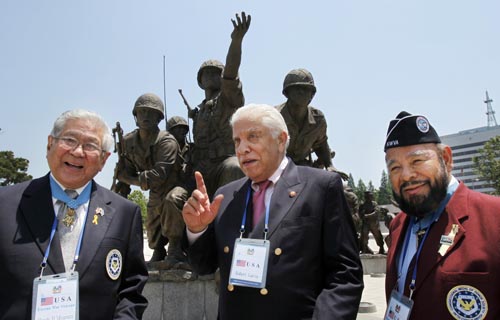 U.S. war veterans look at what was once a battlefield as they stand in front of a bronze statue honoring soldiers who fought in the Korean War at the War Memorial in Seoul on Wednesday. From left: Hiroshi Miyamura, Robert Garcia and Rodolfo Hernandez. Miyamura and Hernandez both received Congressional Medals of Honor for their service in Korea. Garcia is a former U.S. congressman from New York. By Lee Chan-weon


“There was snow, and it was very cold,” Hiroshi Miyamura, 84, said as he described his first glimpse of what is now North Korea when he landed there in the middle of the Korean War. That was quite a contrast to the 30 degree Celsius (86 degree Fahrenheit) weather outside the hotel where he is staying this week.

Returning to the southern part of the now-divided country for the 60th anniversary of the war’s start, Miyamura is among the roughly 300 veterans from nine countries and their families invited here for the occasion.

“Korea is one miracle country,” he said about present-day South Korea, smiling. “They had maybe one road!”

Former New York Congressman Robert Garcia, 77, who is better known as “Bob,” feels the same about the country he fought in when he was just 17 years old. “He was so young his mother had to sign him in,” said his wife, Jane, who is with Garcia on his eighth trip back to Korea.

“You people have taken a bad thing and made it better,” Garcia said as soon as he had arrived at Incheon International Airport earlier this week. “Koreans have done so well, not only here but Koreans in the U.S. as well.”

“Everything was rubble,” he continued, looking out the bus window on his way to a Seoul hotel. “There was nothing! Young people - they have no idea and can’t possibly comprehend the progress that’s been made here in 60 years.”

Garcia said he was scared when he first arrived on the battlefield in Incheon, where he served in the artillery unit as a wireman.

“He was a boy when he first came, but he went back a man,” his wife Jane said, adding that the war was a “defining moment in his life.” 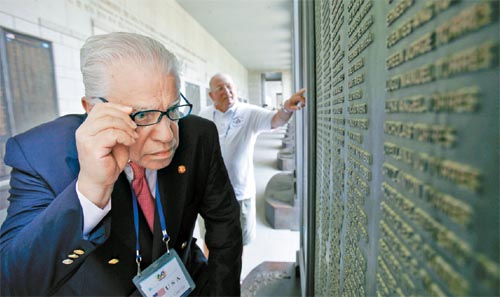 Former U.S. Congressman Robert Garcia leans in to read the names of Puerto Rican soldiers who fought during the Korean War, embellished on a plaque at the War Memorial in Seoul on Wednesday. Garcia is of Puerto Rican descent. By Lee Chan-weon

The former congressman said he likes Korea so much that he wanted to come here during the anniversary of the war instead of attending an event in Washington, D.C., with U.S. President Barack Obama in attendance.

“I told my buddies there that I’ll be the congressional representative in Korea,” said Garcia. “Why? Because I like the country. This was a country worth fighting for. The people were industrious and determined to be free. Everyone has a chance at an education.”

He also pointed out that the Korean War was the “last war that had a definitive [goal],” although the end result was a country divided. For the soldiers, the end of the war signified a return to reality.

“No one laughed or applauded when it ended. We just went back home,” Garcia said.

“I get so emotional whenever I think about it, because I was able to [live]. I am blessed with 16 grandchildren. And I am so thankful,” he said. “The people who died here never even had one.”

As the first Hispanic - and the first Puerto Rican - member of the New York State Senate, Garcia praised his fellow Puerto Ricans for “fighting valiantly” and sacrificing their lives in the Korean War.

His eldest grandson will soon be in Korea to serve at the U.S. Army base, following in his grandfather’s footsteps. Garcia said he would “rather have him here than anywhere else.”

Miyamura was one of the 5,000 or so Japanese-Americans who fought for the United States in the Korean War despite the history of conflict between Japan and Korea.

He was one of three Japanese-American soldiers who received the Congressional Medal of Honor from the U.S. government for their service in Korea. He is the only one of the three who is alive today.

Miyamura, who also served in World War II, said he did not see much combat prior to the Korean War.

“I was drafted in January of 1944, as soon as I turned 18. I didn’t see much fighting at the end of World War II,” he said. The veteran was part of a famous Japanese-American unit, the 442nd Infantry Regiment, in World War II that was the most highly-decorated regiment in U.S. Armed Forces history.

Everywhere he went, he said, it seemed wars were ending.

“The war was over and they made us guard German prisoners,” he said. “We were then sent to the Pacific, but that ended again when we arrived.”

Miyamura said he was kept out of the Japanese internment camps set up in the U.S. after the attack on Pearl Harbor, thanks to a petition signed by members of his community.

After his discharge, Miyamura returned to his hometown of Gallup, New Mexico - where he was born - and became an auto mechanic and got married.

He was asked to join the Army Reserve in June of 1949 and he accepted. He arrived in Korea in September 1950. Two months later he had landed in Wonsan, North Korea, as the leader of a machine-gun squad.

“We fought right up to the Yalu River and we could see the Chinese on the other side,” Miyamura said. “We lost a lot of men and we had to fight the Chinese that came.”

He recalled that the following year, as midnight approached on April 24, he was given orders to “hold the hill” in Taejon-ni, present-day Daejeon.

“I told my men to leave when I saw the Chinese coming, then I had to leave because we were dropping shells on the place, too,” he said. “I wasn’t going to die there.”

After his 16 men had escaped, Miyamura rushed down the mountain, shooting, throwing grenades and bayoneting the enemy forces swarming around him. There were so many of them, he said, that he lost count.

His Medal of Honor citation says the number was around 60.

“I had to act fast; if you stopped it might be too late,” said the veteran.

Miyamura was then wounded by an obscure stretch of barbed wire set at the base of the mountain and he passed out, bleeding. “Get up,” he heard in English the next morning.

He was taken prisoner by Chinese forces fighting for Kim Il Sung. He and other prisoners of war taken by the Chinese were forced to march for two weeks without food or medicine. He spent another 27.5 months in prison until the Korean War ended in 1953.

Although his memories from that time are vivid and grim, he says, he feels a duty to tell the world his story. Miyamura added that he has tried to help all Koreans that come to Gallup, where he still lives with his wife.

He explained that he learned about the historic Japan-Korea conflict during his service in Korea, and that the Koreans he met at the time were curious about his status.

“At every village where we stopped during our march, they would all come and point at me, because I was a Japanese in an American uniform!

“They didn’t understand why [I was fighting for the Koreans],” he said with a chuckle. “But the [Korean] government is now doing so well to teach its young people [about the war].”

Miyamura received his Medal of Honor from former U.S. President Dwight D. Eisenhower in October 1953 for his actions in Taejon-ni. He had the medal with him this week for events prepared by the Korean government to mark the 60th anniversary of the Korean War.

“I didn’t fight to win the medal. I just did what I did because that’s what I had to do,” he said.

The men and their families have been invited here by several groups, the most prominent being the Ministry of Patriots and Veterans Affairs. They visited historical sites throughout the week, such as the national cemetery, the DMZ and the War Memorial.

“We started having these commemorative events in 1974 to show our gratitude,” said Jeon Yong-jin, international cooperation officer of the 60th Anniversary of the Korean War Commemoration Committee. “But I feel we should have started sooner and made it a bigger event, because as you can see, all of them have grown old.”

Rodolfo “Rudy” Hernandez, 79, who was visiting Korea for the fifth time, made a 14-hour flight to be here and said the country as a whole had changed over the past 60 years. Hernandez was bestowed the Medal of Honor by former U.S. President Harry S. Truman in April 1952 for his defensive actions in Wonton-ni in May 1951, which left him with injuries that still affect him. Hernandez was severely wounded when a grenade exploded near his head and he was almost left for dead in the battlefield.

When asked if he had any regrets about fighting in the war, he had a firm response. “No,” he said. “I would do it all over again.”