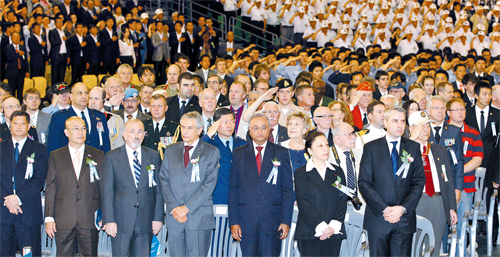 Representatives from 21 countries whose troops fought for the South during the 1950-53 Korean War attend a ceremony in southern Seoul yesterday to mark the 60th anniversary of the war’s outbreak. [YONHAP]

As he helped mark the 60th anniversary of the outbreak of the Korean War in a ceremony at Seoul Olympic Park, President Lee Myung-bak yesterday again urged North Korea to take responsibility for sinking the Cheonan.

“North Korea should admit its wrongdoing honestly, apologize for it and take a responsible posture before the international community,” Lee told the crowd of about 5,000 people, who included Korean and foreign veterans who fought on the South’s side during the 1950-53 conflict.

Lee’s remarks followed his public address on May 24, in which he called on the North to apologize for the tragic March 26 attack on the South Korean warship, and punish those responsible. A group of multinational investigators concluded last month that a North Korean torpedo sank the ship, killing 46 of its sailors; the North has denied the charge.

Many observers believe the tensions left in the wake of the attack have mounted to a point not seen since the two Koreas declared an armistice in 1953.

“It [the North] has to stop its reckless military provocation and seek a path for Korea’s 70 million people to live together,” Lee said.


The Blue House said yesterday was the first time in many years that the president had participated in the event to mark the onset of the Korean War. In the past, the prime minister or minister of Patriots and Veterans Affairs has led the commemoration.

Analysts said Lee’s attendance reflected heightened awareness of national security, in addition to the significance of the 60th anniversary.

Around 400 veterans from 16 UN member countries who fought in the Korean War as the South’s allies were invited to the event, marking their biggest attendance so far, according to the Blue House. The presidential office said Lee also sent a letter of thanks to around 300,000 veterans in Korea and abroad.

South Korea as it is today only exists because of the sacrifice of the “friends of freedom” all over the world, Lee said at the event.

The Defense Ministry held its own commemoration at the War Memorial in Yongsan, Seoul, where guests included Walter Sharp, the commander in chief of the ROK-United States Combined Forces Command; Joseph F. Fil Jr., commander of the Eighth United States Army; and Defense Minister Kim Tae-young.

The anniversary was also commemorated by the United States, Seoul’s biggest ally, during and since the war. More than 3.5 million U.S. soldiers have served in Korea over the last six decades, including 28,500 U.S. soldiers who are now on active duty.

On Thursday, the U.S. Congress marked the anniversary, and the U.S. Department of Defense held an event at the Pentagon in Washington, with Joseph W. Westphal, undersecretary of the Army, as keynote speaker. Han Duk-soo, South Korea’s ambassador to the United States, also attended.

A total of 40 Korean embassies based in 22 countries that participated in the Korean War also launched commemorative events yesterday, inviting a total of 16,050 veterans, their families and government dignitaries to express Seoul’s gratitude.