Even after last year, not prepared for rain

Even after last year, not prepared for rain 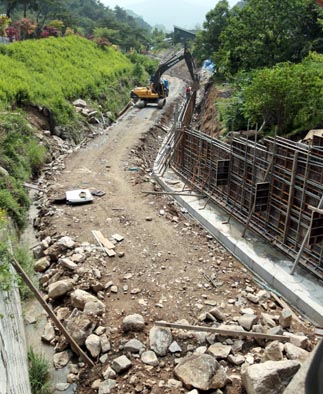 As the monsoon season approaches, residents in some provinces are still surveying damage from last summer’s rains - and wondering what their governments have been doing for the past year.

Near the Gimhae and Hongcheon Rivers, where heavy spring rainfall has increased the risks of avalanches, construction to build bridges and expand banks prone to flooding won’t be finished until the end of the year. In Jecheon City’s Pyeongdong village, North Chungcheong, it’s been a year since floods wiped out 36 buildings and 80 acres of agricultural land, but excavators and dump trucks are still working to get rid of soil that washed into the Pyeongdong Stream.

“The monsoon season has started ... and I am worried that we’ll suffer again if the stream floods,” said villager Oh Geum-Ja. “I don’t know what the government, North Chungcheong, or Jecheon City have been doing for the past year.”

Kim Han-bok, who is in charge of managing Jecheon City’s streams, said the government has blocked the banks with boulders to hold back soil runoff, and cleared out branches and other debris that could cause overflow.

“There will be no disasters,” he said.

In other provinces that suffered similar water losses, construction to prevent another natural disaster has begun - but not yet finished. Chuncheon in Gangwon is only halfway through widening the Chugok Stream flowing from the Hongcheon River - which runs backwards, submerging nearby agricultural lands in Balsan village - and building two bridges to avoid damage when rains swell the stream.

An official of Chuncheon said construction got off to a late start because the National Emergency Management Agency reconfigured the layout of the bridge in May.

Last July, the lowlands of Jeonha, Bonghwang and Nae-oe village in Gimhae, South Gyeongsang, flooded when rain fell at 2.4 inches per hour. Local officials will finish inspecting the drain pipes at the end of this month, but it will take another year before construction wraps up on a new giant pump station downstream of the Bongok to take care of overflow.

Bangrim in Gyeonggi also saw the floods of 2009 wash soil into its village. There’s danger of avalanches at a construction site here, but no safety precautions in place. It’s not the only risky site: The Gyeonggi Emergency Management Agency has identified 56 areas at risk of flooding in 18 major construction sites in the province.

Sites along the four rivers restoration project are also under the threat of flood.

If precipitation this year is higher than last, 50 percent more areas in Korea will run the risk of avalanches. Already, 16 inches of rain have fallen since February, the second-highest rainfall since 1976.