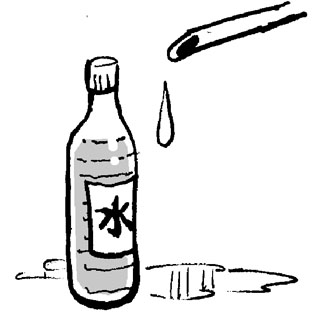 Water often appears as a life-giving substance in folktales. That is probably because water is the source of everything in the world, including human life.

Water takes an important role in “The Tale of Princess Bari,” a song in ogu-gut, the traditional Korean shamanistic ritual of purification.

Bari is born as the seventh daughter to the chauvinistic King Ogu, who had hoped for a son. Disappointed by yet another daughter, he discards baby Bari, and she is raised outside the palace walls.

Later in Bari’s life, the king becomes seriously ill, and out of filial duty the disowned princess descends into hell to bring back life-giving water to save her father. This water miraculously rejuvenates the deathly ill king.

Life-giving water exists in reality as well. The holy water of Lourdes, France, is renowned the world over. In 1858, 14-year-old Bernadette Soubirous found the spring in the cave of Massabielle. The young girl was later canonized as a saint.

The spring water of Lourdes became more famous after Alexis Carrel, the 1912 Nobel Prize winner, wrote in a book of the water’s magical healing effect on his own ailment, as well as those of countless others.

Other places around the world have produced water with supernatural restorative powers. The German government has verified the healing effects of water from an abandoned mine in Nordenau. Patients who developed leukemia after the Chernobyl disaster reportedly benefited from the water.

Similarly, a well in Tlacote, Mexico is also well known. According to clinical tests by a general hospital, the water has 80 percent healing effects on some 200 ailments including allergies, skin diseases, disease of the digestive organs and diabetes.

Then there is the story of “Lorenzo’s oil,” which was made into a Hollywood film in 1992. When their son Lorenzo was diagnosed with a rare disease, adrenoleukodystrophy (ALD), Augusto and Michaela Odone undertook a herculean effort to find a cure. Eventually, they were able to use an extract of pure olive oil to treat their son. Many young boys were treated with the oil, which, despite not curing every patient, was proven to effectively prevent the disease.

A professor of medicine at a prestigious university in Korea was arrested recently on charges of manufacturing false machines that, he asserted, could turn ordinary tap water into the miraculous holy water of Lourdes.

Had he been truthful, this professor could have been the creator of Korea’s own Lorenzo’s oil, but according to a police probe, his water was not even drinkable. Instead of being life-giving water, it brought death.

One wonders if it will ever be possible to manufacture true life-giving water.