Grand slam but no gold

Grand slam but no gold 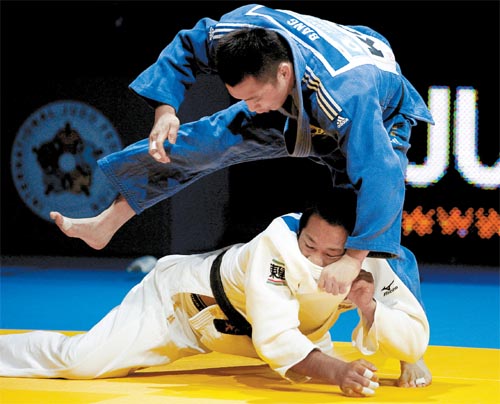 Three Korean judokas managed to advance to the finals in their respective weight classes, but none of the three were able to win a gold medal on the first day of competition at the 2010 Moscow Grand Slam judo tournament yesterday.

Bang Gui-man of Korea, pictured in blue, who competes in the men’s -73 kilogram (-161 pound) division, attempts a choke hold on Yasuhiro Awano of Japan.

Bang managed to win the match on a yuko, worth less than half of one point and usually used as a tie-breaker, but he lost to Benjamin Darbelet in the finals by ippon, or the decisive point that wins a match.

Kim Joo-jin, who is in the -66 kilogram division, cruised through four opponents in the semifinals, including Russian Alim Gadanov, before losing to Russia’s Musa Mogushkov in the finals.

Chung Jung-yeon, competing in the women’s -48 kilograms division, won her first three bouts by way of ippon before losing to Emi Yamagishi of Japan on two shido, or penalty points.