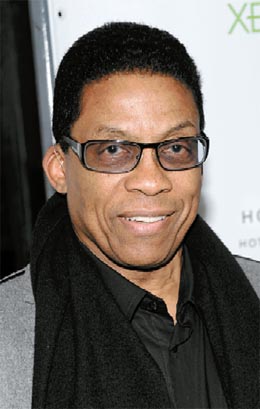 Herbie Hancock’s restless creativity won’t allow him to rest. Two months after celebrating his 70th birthday, the jazz piano legend has released the most ambitious recording of his nearly 50-year career - “The Imagine Project” - a globe-trotting, multi-lingual, genre-mixing journey.

“It feels like I turned 30,” laughed Hancock. “For me, sitting back and being in a comfort zone is like death. I want to be very much alive. There’s too much growth left in me, more surfaces to scratch.”

Unlike previous albums, “The Imagine Project,” released on his new Hancock Records label, doesn’t include any original compositions or instrumentals. The album’s collection of 10 songs reflects his newfound interest in lyrics that he developed while working on 2007’s Joni Mitchell tribute, “River: The Joni Letters,” the first jazz album since 1965 to win the Album of the Year Grammy.

Hancock’s reputation enabled him to call on a United Nations of pop and world music stars from 11 countries - from Pink and John Legend from the United States to Colombia’s Juanes, the Congolese band Konono No. 1, and the nomadic Saharan Tuareg band Tinariwen.

The inspiration for the album came in late 2008 when Hancock and “River” co-producer Larry Klein watched the PBS documentary “Journey of Man” in which geneticists trace the “global family tree” to one African man who lived 60,000 years ago.

“I cried a lot watching this,” said Hancock, speaking by telephone from his Los Angeles studio. “It just made me think about the connection that we all have from our common ancestor.”

Hancock said his attorney, Ken Hertz, suggested that he might use John Lennon’s song “Imagine” as “a centerpiece for a record about peace” that would reflect his Buddhist beliefs.

“I decided that I wanted to make a global record as an answer to the question of how do you accomplish peace, and one path is through global collaboration,” said the 12-time Grammy winner. “But that requires being open to cultures outside of our own and to embrace and respect those cultures.”

Hancock felt one way to show respect would be to have the vocalists sing in their native tongues. Hancock also wanted whenever possible to travel to his collaborators’ home turf, whether that meant recording the blues-rock “Space Captain” at Derek Trucks and Susan Tedeschi’s home studio near Jacksonville, Fla., or the bossa nova “Tempo De Amor” with vocalist Ceu in Sao Paolo, Brazil.

“It made sense to me that if I want to get in touch with their culture, I should go there. I should taste the food, smell the air, be around the people,” he said.

Hancock’s odyssey began in February 2009 on a State Department-sponsored trip to India with other musicians to mark the 50th anniversary of Martin Luther King, Jr.’s visit to study the nonviolent teachings of Mahatma Gandhi. Hancock brought Chaka Khan into a Mumbai studio with some Indian musicians to record “The Song Goes On” - a melody that Klein set to a Rainier Maria Rilke poem.

Hancock wrapped up the recording sessions in April in Los Angeles with “Imagine,” which opens the CD. That piece begins with a sparse acoustic intro with Hancock accompanying Pink and Seal. India.Arie then sings the Lennon lyrics to an Afro-pop groove laid down earlier by Konono No. 1 with Hancock at a Paris studio session with African musicians. That’s followed by Oumou Sangare chanting an adaptation of the song in the Bambara language of her native Mali.

Hancock brought along Oscar-winning filmmaker Alex Gibney (“Taxi To The Dark Side”) to shoot footage for a feature-length documentary, “webisodes,” and audio-visual backdrops for concerts on his recently launched world tour. Hancock says the footage gives viewers a chance to see how the musicians work together, hear their off-the-cuff remarks and “experience the joy on their faces.”

“I’m hoping that people can be inspired by the idea that this kind of global collaboration between cultures can work,” said Hancock.