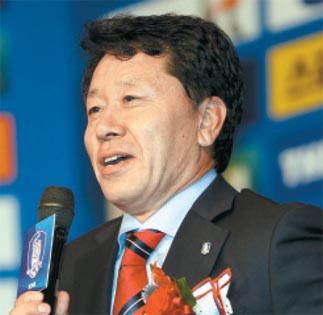 Members of the Korea Football Association’s technical committee are intent on selecting a Korean manager to succeed Huh Jung-moo and are leaning towards naming Huh’s assistant Chung Hae-soung.

Since Huh declined the KFA’s offer to stay on with the national football team last week, the technical committee has been considering several candidates and seems to have reached a consensus on choosing from a pool of domestic managers.

“We won’t categorize our candidates and exclude candidates from abroad, but we have many excellent managers in Korea,” said Lee Hoi-taek of the KFA’s technical committee.

Shin Jae-heum, another committee member, echoed that sentiment and added, “I don’t see a particular reason to bring in a manager from abroad.”

“If Korean football is to continue to attract fans, we need a popular Korean manager to emerge,” added Kang Young-chul.

The technical committee will hold a meeting today at 2 p.m., and another meeting is expected to be held on July 13. But Chung seems to have the edge at this point.

Chung is currently free of any obligations and, after having served under Huh, knows the players and the system better than anyone.

With the 2011 Asian Cup in Qatar (Jan. 8 to 30), Huh’s successor will not have a lot of time to gather and prepare his team for the tourney. The incoming manager is expected to be given a short-term deal and could receive an extension of up to two years depending on the performance of the national team at the Asian Cup.

“It’s only natural for Chung to succeed Huh as the manager of the national team,” said Cho Young-jeung of the technical committee. “He is not under any obligations at this point and knows the players well.”

“It’s only right for Chung to be given a fair opportunity,” Kang added. “However, he needs to start with a short-term contract and prove himself.”

Coming off of a successful showing at the 2010 World Cup, KFA officials are eager to stake their claim as the best football squad in all of Asia.

Despite qualifying for seven consecutive World Cup tournaments starting in 1986, Korea has not fared particularly well at the Asian Cup. Korea won the inaugural tournament in 1956 and defended its title in 1960, but the team has failed to net similar results in the past five competitions. Korea has finished third overall twice and reached the quarterfinals twice.

In the upcoming tournament, Korea has been grouped with Australia, Bahrain and India in Group C. The top two teams from each group advance to the quarterfinals.

Although it’s the nation’s most coveted coaching job, the new manager will face high pressure in light of the national team’s advancement to the 2010 World Cup’s Round of 16 and captain Park Ji-sung’s hints at retirement following the Asian Cup.

At a Blue House luncheon yesterday with national team members, who were invited by President Lee Myung-bak, Chung played down the possibility of succeeding Huh.

“I have never considered the position to be honest with you,” Chung was quoted as saying at the luncheon. “How could I consider the position when I’ve never been offered the job? I have yet to be contacted by the KFA or anyone else about managing the national football team.”

At yesterday’s luncheon, President Lee congratulated the players for reaching the Round of 16 for the first time on foreign soil and thanked the players and coaching staff for their “hard work and inspirational run.”