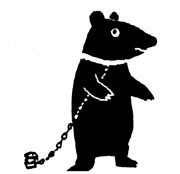 In Korean, there is a saying that someone is “foolish as a bear.” But this is a false analogy. Bears are quite wise and actually have an intelligence comparable to that of gorillas.

Bears know instinctively where to stand along the river in order to catch the salmon that swim upstream during mating season.

When we watch bears catch the salmon swiftly with their forelegs, we cannot help but be impressed.

Perhaps this is because we see something of ourselves in them. They are a similar size and even look a little like people when standing.

In the Dangun myth, a bear is the mother of the Korean race.

According to the legend, Hwanung - the son of the Lord of Heaven - transformed a bear into a woman.

When the bear-woman was sad because she did not have any children, Hwanung took her as his wife. The bear-woman soon gave birth to a son, Dangun, who founded the Gojoseon Kingdom in Korea.

Yet, our relationship with bears is not that simple. Bernd Brunner, a German writer who wrote “Bears: A Brief History,” has said that people have venerated, caressed, tortured, nurtured, killed, eaten and despised bears.

The latter three are especially true in Korea. Although a bear-woman was the mother of the legendary founder of Gojoseon, Koreans have too often killed and eaten bears, rather than respected them.

The reason for this hateful relationship is the bear’s gallbladder. It is said that if the gallbladder is dried and consumed, it can cure almost any disease.

In the whole world, China and Korea are the only two countries that raise bears for slaughter.

It is said that Koreans are currently feeding 1,400 bears in order to kill them for their gallbladders.

The environmental organization Green Korea United is petitioning the government to enact a special law prohibiting bear raising. They argue that since the bears people are raising are an endangered species, people must not be allowed to kill them for their gallbladders.

I fear that if the law gets passed and the bears go free, however, poachers will kill them in the wild.

Even if there weren’t bear farms, Koreans would still try to get the magical panacea from the bears.

Koreans’ only interest in bears is their gallbladder. They are not interested in coexisting peacefully with them.

Humans need to make some difficult decisions about the fate of captive bears soon. We must try to protect the creatures who have such strong ties to Korean history.