A disturbing look at the war that never ended

A disturbing look at the war that never ended 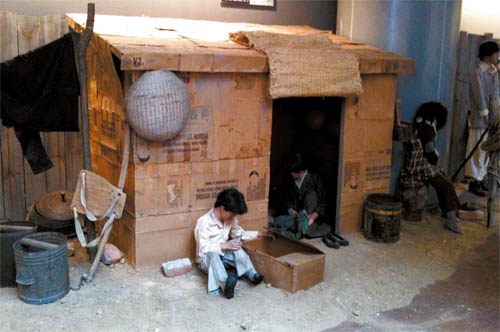 A diorama at the War Memorial of Korea depicts two refugee children during the Korean War. Provided by the museum

The War Memorial of Korea’s four-part exhibition titled “Ah! 6.25,” after June 25, the day of the North Korean invasion in 1950, spotlights the background of the Korean War and the South’s progress since then, as well as the present state of North Korea.

“The comprehensive exhibition features weapons, everyday items and photographs from the wartime era as well as re-creations of scenes from that time,” said Yu Eul-gu, director of the exhibition. “It also looks into the socioeconomic development of South Korea during the six decades since the war and compares its state to that of North Korea.”

In zone one, “The Korean War,” there are sections on who started the war, Korea’s allies, the lives of refugees during the war and real-life artifacts, all accompanied by a timeline of the war.

“Miracle on the Han River” is the title of the second zone, which features Korea’s development after the war. Photographs of local sports stars and details of Korea’s scientific, industrial and defense development including the Naro rocket and automobile exports only serve as a contrast to the third zone, a harsh look at the current state of North Korea, including re-creations of political prison camps there.

It may seem a stretch to include these sections in an exhibit about the Korean War, but of course since the fighting ended in an armistice, the war still technically continues.

“I’ve seen a few senior citizens who got tearful looking at these re-creations,” said Yu.

A special annex called “Inside the DMZ” gives viewers a glimpse of the demilitarized zone up close through photographs and videos.

Some are incredibly beautiful, thanks to the rich ecological diversity in the area around the DMZ.