A teenage cartoonist’s diary of horrors

A teenage cartoonist’s diary of horrors 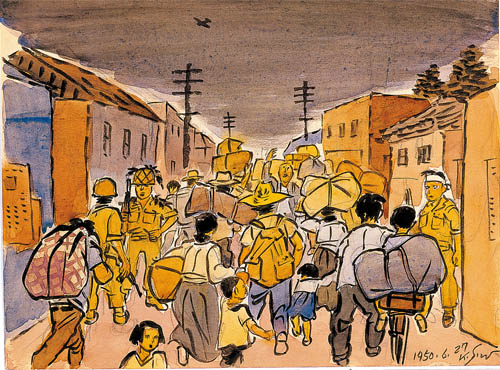 This sketch by Kim Sung-hwan, titled “Near Donam Bridge,” depicts refugees fleeing Seoul during the Korean War. Kim would later become one of Korea’s most prominent political cartoonists. Provided by the museum

“The Forgotten War, the Reality of Division,” at the National Museum of Contemporary Art has at its core the day-to-day sketches of Kim Sung-hwan. Perhaps Korea’s most influential cartoonist, Kim is now in his late 70s, but as a teenager at the outbreak of the Korean War, Kim sketched the gruesome events he witnessed in Seoul, where he lived.

Born in Kaesong, now in North Korea, in 1932, he moved to Seoul with his family as a child. At 18, Kim sketched fleeing refugees and soldiers, hiding from North Korean troops. During that time, he also worked as a part-time magazine illustrator for different publications.

After the war, Kim made a name for himself with “Gobau,” Korea’s longest-running political cartoon series, published in such newspapers and magazines as Yonhap News and Hwa Rang.

The series of sketches begins with one from June 27, 1950, titled “The sound of gunfire from Uijeongbu,” depicting two people looking up at white smoke coming from gunfire on a faraway hill. Another sketch, “Near Donam Bridge,” drawn on the same day, shows a crowd of citizens fleeing their houses.

By the next day, Kim had sketched his first dead body. “The death of a South Korean soldier,” created on June 28, 1950, shows the bleeding body of a young boy laying on the ground without pants on. Kim wrote at the time, “In an alleyway, the corpse of a South Korean soldier lay. The neighbors, after finding bullet wounds on him, took off his bloody clothes and wrapped white cloth around his body. After moaning in pain all night, he died.”

By September, Kim’s family had fled to Kaeseong to hide at his aunt’s house. In a Sept. 12, 1950 sketch, “A hiding place: Jingoron in Kaesong,” Kim draws a detailed map of the house, labeling his escape route in case soldiers were to find them.

“Kim Sung-hwan joked to us that because he had come from nothing and had nothing, he didn’t have any particular concern for his own livelihood, which is how he was able to get such close-up sketches of the war,” said Lee Chu-young, curator of the exhibition.

Besides Kim’s sketches and a video interview of the cartoonist, the exhibition showcases seven other works by various artists, including paintings and sculptures, centering on the Korean War.