Cheonan commemorates battle behind the ship

Cheonan commemorates battle behind the ship 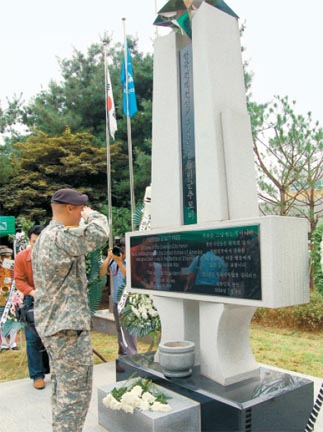 A soldier from Camp Humphreys salutes in front of a monument commemorating the Battle of Cheonan in July 1950. By Jeffrey Miller

CHEONAN, South Chungcheong - Before the sinking of the Cheonan shocked the nation and reminded everyone of a war that has never really ended, this ill-fated ship shared more than its name with one of Korea’s fastest rising cities - it also shared a historical tie with a fierce battle in the early weeks of the Korean War.

Last Thursday around 200 dignitaries, ROK and U.S. military personnel, veterans and guests gathered in front of a monument in Cheonan, South Chungcheong, to commemorate the 60th anniversary of the Battle of Cheonan and remember the sacrifices of 129 Americans who lost their lives, including their commander, Col. Robert R. Martin.

Although the Battle of Cheonan was more of a delaying action than a gallant stand, the significance of that brave stance from July 7-8 has not been lost on the citizens of Cheonan.

“The citizens of Cheonan, including me, do not doubt that this memorial stone honoring the sacrifices of the soldiers is a historical monument proving that Korea and the U.S. are allies tied with blood,” Cheonan Mayor Sung Moo-yong said in front of the monument in Samyong-dong.

Sixty years ago, following American’s entry into the Korean War with Task Force Smith and battles at Osan and Pyeongtaek, the 34th Regiment, 24th Division of the U.S. Army, had taken up defensive positions on the northern and western edges of town around the railroad station.

“Each year, we gather to remember and honor those warriors of this incredible unit who stood fast against an overwhelming force,” said Capt. Darrell Flythe from Camp Humphreys. “We reflect on the collective commitment and sacrifice of these determined defenders.”

Commanding the regiment and those determined defenders was the newly-appointed commander, Colonel Martin, who would soon take matters into his own hands on the morning of July 8.

“In the early morning, Bob Martin was hunting through the streets of Ch’onan [sic] with a 2.36-inch bazooka,” writes T.R. Fehrenbach in “This Kind of War.” “It was no job for a regimental C.O. - but somebody had to do it.”

Martin soon engaged one of the enemy attacks; unfortunately, the “obsolete rocket charge fizzled out against the tank’s steel hull” at the same time the tank fired in the direction of Martin’s location, killing him instantly.

Martin, who would be awarded the Distinguished Service Cross, the first one awarded of the Korean War, had only commanded the regiment for 14 hours.

Today, a street and park in Cheonan as well as a pedestrian overpass connecting the Cheonan Museum with a nearby park are named after him.

Following Martin’s death and having sustained great losses, the regiment was now down to 175, having lost 350 men. With increasing numbers of North Korean forces pouring into the city, the U.S. forces retreated from Cheonan and took up defensive positions north of Daejeon along the Geum River by the 9th of July. Although Cheonan fell to the North Koreans, the 34th Infantry Regiment was able to buy precious time for other forces that would soon take up defensive positions along the Busan Perimeter.

With the nation still reeling from the sinking of the Cheonan, Mayor Sung reminded all in attendance not to forget the sacrifices of the sailors who perished as well as the soldiers who died on this battlefield 60 years ago.

“We all should remember their noble sacrifices,” Sung said. “We all should keep in mind that the honor is theirs, the duty is ours.”