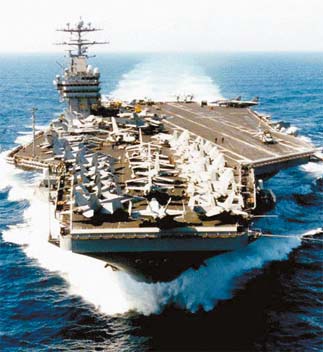 South Korea could face a period of increased tensions with China due to the joint naval exercise it plans to hold with the U.S. in the Yellow Sea in spite of objections by Beijing.

The joint South Korea-U.S. naval exercise is meant to send a warning to North Korea about provocative actions in the Yellow Sea after the North’s sinking of the Cheonan in March.

But Beijing has opposed the anti-submarine exercise, which may include the U.S.S. George Washington, a U.S. Nimitz-class aircraft carrier, because the drill will take place close to its territorial waters.

South Korea’s relations with China have already been strained in recent months following the sinking of the Cheonan because of China’s efforts to water down any international condemnation of North Korea.

Security analysts in Seoul say that South Korea could ease tensions with Beijing by inviting Chinese observers to the upcoming exercise or reduce the scale of the operation.

China’s media and security analysts have had harsh words about the exercise after the U.S. Department of Defense announced on June 28 that the drill would take place this month.

Qu Xing, president of the state-run China Institute of International Studies, said China felt “very sensitive” about the exercise, adding that Seoul needed to take into account the reaction of North Korea when the inter-Korean relations had sunk to their lowest level in at least a decade.

“Even when you use the exclusive economic zone [of South Korea] for peaceful purposes, you still need consensus from neighboring countries,” Qu told journalists. “You need to make a decision on the military exercise very cautiously by considering inter-Korea relations, Korea-China relations and U.S.-China relations.”

“Our stance is consistent and clear,” Qin said. “We have already expressed our resolute interest and concerns to related parties.”

Global Times, a Chinese newspaper, said the exercise had the potential to “destabilize the Northeast Asia region more than the Cheonan incident.”

“Is South Korea trying to take revenge on China for not joining the criticism of North Korea regarding the Cheonan issue?” said the paper in an editorial. It added, the military exercise “is something South Korea should not do to China, its biggest trading partner.”

South Korea has shown no attempt to appease China. Foreign Ministry spokesman Kim Young-sun said, “I am pretty sure China understands well the nature of this joint drill.”

But analysts say that Seoul must take into account that China agreed to a presidential statement from the UN Security Council last week condemning the attack on the Cheonan, although it did not name North Korea as the guilty party.

One senior Foreign Ministry official said China made a “very significant, painful but right decision” in supporting the statement.

Lee Su-seok, a senior analyst at the Institute for National Security Strategy, said Seoul needs to work harder to avoid political disputes with China, which views the involvement of a U.S. aircraft carrier in the Yellow Sea as having a possible link to plans by the U.S. to defend Taiwan in the event of a Chinese attack on the island.

“You can give China some options, like inviting Chinese officials to view the drill or keeping them updated about the drill’s progress and activities to some degree,” he said.

Kim Ki-jung, a professor of political science at Yonsei University, said another option to ease China’s opposition is to reduce the scale of the exercise, which is now expected to include nuclear submarines, Aegis-class destroyers and F-15 combat fighters in addition to the aircraft carrier.

“You can’t just cancel the scheduled military drill because China opposes it,” he said. “But you can minimize the diplomatic disputes by scaling back the exercise and strategically choosing the timing of the event.”

However, some China-based analysts believe that fears over a rise in tensions between South Korea and China are exaggerated.

Zhang Baohui, a professor of political science at Hong Kong’s Lingnan University, told Yonhap that the U.S. and China have been cooperating closely on how to deal with North Korea, as shown by the UN statement, and this “might deflect attention on the U.S.-South Korean naval exercise.”