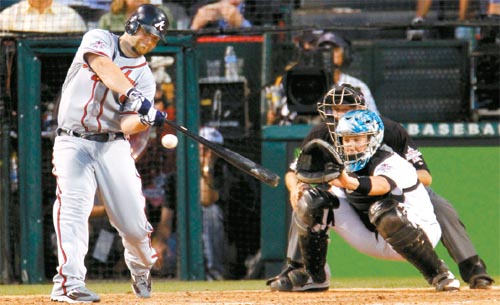 Brian McCann of the Atlanta Braves belts a double in the seventh inning of the All-Star Game in Anaheim, California, on July 13. [REUTERS/YONHAP]


ANAHEIM, California - Brian McCann’s three-run double in the seventh inning provided the National League all the offense it needed to capture its first All-Star game since 1996 with a 3-1 victory over the American League on Tuesday.

In a year of dominant pitching, young starters David Price and Ubaldo Jimenez set the tone - and got even more help from the tricky shadows.

Nearly the entire field at Angel Stadium was bathed in odd patterns of sunlight for a twilight first pitch, creating more awkward swings and misses than usual in baseball’s annual talent show.

The National League earns home-field advantage in this year’s World Series. The AL didn’t go down without some ninth inning drama, started by David Ortiz’s leadoff single. But Jonathan Broxton sealed it, helped by an alert play from right fielder Marlon Byrd and shaky base running by Ortiz.

Ortiz was on first base with one out when John Buck hit a blooper that Byrd scooped up and threw to second to force out on the slow-moving Boston designated hitter. With Alex Rodriguez standing on the steps in the AL dugout, Ian Kinsler flied out and the NL had its win.

“It felt awesome for us to get the win and break the streak,’’ Broxton said.

Until most valuable player McCann cleared the bases, Robinson Cano’s fifth inning sacrifice fly stood as the lone run in a game expected to be decided by loaded pitching staffs on each side. McCann’s deep fly ball to the warning track in right gave the NL hope in the fifth. When he made good with that bases-loaded double off Matt Thornton, Atlanta’s steady catcher hit second base and pumped his right fist.

The three guys who scored headed to the dugout with a renewed swagger.

Cano and his fellow Yankees All-Stars wore black armbands after the death of longtime New York owner George Steinbrenner from a heart attack earlier Tuesday in Tampa, Florida, at age 80. Pictures of The Boss were shown on two video screens before a pregame moment of silence, and flags hung at half-staff.

“It’s a difficult time, on a great day for baseball, the All-Star game, something everyone looks to,’’ Yankees and AL manager Joe Girardi said. “A great man in baseball passed. He’s meant so much to not only this organization, but to the game of baseball, and to all of us personally.”

It took the NL 14 years to break through after several close calls. The National League lost the last two 4-3, including a 15 inning affair in 2008 at Yankee Stadium. The two before that were also one-run defeats.

Phillies chairman Bill Giles had razzed Charlie Manuel that his job was on the line if the NL didn’t finally win again.

Turns out this National League lineup didn’t need star Washington rookie Stephen Strasburg - though the phenom pitcher might have generated a nice buzz around the ballpark in those early innings.

Jimenez, Colorado’s 15-game winning pitcher and first-time All-Star, came out of the gate with two scoreless innings. Price, who at 24 is the youngest All-Star starter since 23-year-old Dwight Gooden of the Mets in 1988, matched that. Then came Marlins ace Josh Johnson with two more.

It took until the fifth inning for hitters to start making regular contact, the shadows all but gone aside from a couple of small patches in the outfield. With a first-pitch temperature of 85 degrees, this was a steamy summer night even by Southern California standards.

Neither offense did much to excite a relatively quiet crowd of 45,408. There were noticeable empty seats high in the third deck of right field. Heath Bell’s all-out sprint in from the bullpen to face local favorite Torii Hunter generated some of the only roars all night.

The NL squandered its best early opportunity with runners on the corners and one out in the fifth. Justin Verlander struck out Corey Hart and got McCann on the long fly to right. Dodgers reliever Kuo Hong-chih put the AL in good position - men on second and third with no outs - when he stopped Joe Mauer’s comeback shot and sailed a routine throw to first high over the head of Adrian Gonzalez.

Evan Longoria scored the go-ahead run, which was unearned. Seattle’s Ichiro Suzuki made a record ninth start as the AL’s leadoff hitter - his 10th All-Star game.