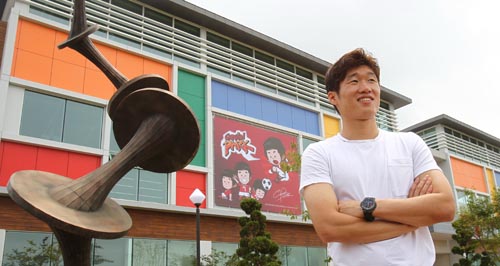 Park Ji-sung poses in front of the Park Ji-sung Football Center in Suwon, Gyeonggi. The youth-focused center is set to open on July 24. By Kim Min-gyu


National football team captain Park Ji-sung opened the door to the possibility of competing in the 2014 Brazil World Cup - just as long as he is in peak form.

With his Park Ji-sung Football Center in Suwon, Gyeonggi, set to open its doors on July 24, Park met with several Korean media outlets earlier this week.

In an interview with the JoongAng Ilbo, the 29-year-old discussed a range of topics, including speculation that he’ll retire from the national team, the World Cup, leadership and his marriage.

Park stated in the past that he went into the 2010 World Cup with the idea that it could be his last. This led to widespread speculation that Park will retire from the national team after the 2011 Asian Cup in Qatar.

But Park said people have put too much weight on his words.

“I never stated that I would retire from the national team,” Park said. “I merely speculated that it could play out that way. I haven’t ruled out playing in the 2014 World Cup. Who would turn down such an opportunity and honor?

Since returning from South Africa, Park has stayed away from watching World Cup matches on his television set. The pain of hearing the final whistle in the Round of 16 match against Uruguay still fresh on his mind, Park has stuck to watching the highlights instead.

“I think the time difference had something to do with it, but after being eliminated, it made it hard for me to watch any of the other games,” Park said.

The veteran proved key for the national team on the pitch but also took on the role of understanding leader in the locker room for his peers. Park was credited with helping some of the younger players get adjusted to the difficulties of competing in the World Cup.

“To be honest, it’s a bit embarrassing and burdensome. I don’t think I possess leadership skills that set me apart from others,” he said. “I merely took on the duties and carried them out in a manner that I had envisioned and in a way befitting my personality.”

Park was modest when asked about his accomplishments.

“None of the older players who played with me and know me well would ever have guessed that I would become captain of the national team,” Park said. “I was extremely lucky, but the most important thing is that I love football and enjoy the game. Even through difficult times, if you can persevere on your own without outside help, opportunities will come along.

“Whoever becomes the next captain, I’m sure he’ll do a great job.”

With the 2010 World Cup now in the history books, the next goal for Park and his teammates is the 2011 Asian Cup. Despite consistently ranking as one of the top Asian teams, Korea has failed to win the Asian Cup since 1960. Park is eager to stake a claim on the title of the best team in the region.

“In Europe, the most important tournament next to the World Cup is the Euro Cup. Many people often say Korea is the best team in Asia, but we have not fared well at the Asian Cup,” Park said. “If people believe the Asian Cup is not an important tourney, I’d like to change that perception. On a personal level, I want to win it badly.”

The Park Ji-sung Football Center was built for youths and boasts two outdoor turf fields and one indoor playing surface on a 15,658-square-meter (168,541 square feet) plot of land.

Park emphasized the importance of exposing kids to the game at an early age.

“I would like for children to learn the joy of playing football here,” he said.

Park - who juggles a professional career with the Manchester United, obligations with the national football team and, now, the football center - is a busy man.

“I’m okay with the media as long as they don’t write gossip stories about who I might be romantically involved with,” said Park with a laugh. “In order to avoid that, I need to get married soon, but I just don’t have the time. Even if I get introduced to a girl, I’m worried my lifestyle might be burdensome for her.”