Shrek: Forever After (All)

“Shrek: Forever After” is the fourth and final Shrek film, only this time around the giant green ogre has grown tired of his domestic life and longs for the days when he was unencumbered by a wife and child. So when the shifty dwarf Rumpelstiltskin offers to magically give Shrek (Mike Myers) a day in his old ogre life in exchange for one day of his childhood, Shrek agrees warily, only to find that Rumpelstiltskin has other plans in mind. Shrek quickly finds himself transported to a parallel universe in which Rumpelstiltskin is king and no one has any recollection of Shrek - not even his wife Fiona (Cameron Diaz) or his friends Donkey (Eddie Murphy) and Puss (Antonio Banderas). The latest installment is a far cry from the clever satire of the first two Shrek films, but it still manages to entertain.

This thriller tells the story of a devoted pastor, Ju Young-su (Kim Myeong-min), whose life and marriage begin to fall apart after his five-year-old daughter is kidnapped and given up for dead. Eight long years pass, and Ju has renounced his faith in God, only to have the kidnapper resurface out of the blue and demand a ransom in exchange for the daughter’s life. What follows is a race to save the girl, and it may end up costing Ju the ultimate price. While the plot doesn’t break new ground in the crowded field of Korean thrillers, Kim turns in a moving performance that will keep audiences engaged until the very end. 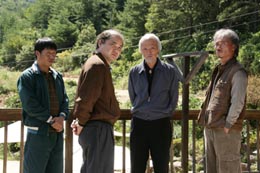 Directed by Kang Woo-seok, “Moss” is another suspenseful thriller that will leave audiences on the edge of their seats. Based on a popular online comic book series that heated up the Web in 2009, the film follows Hae-guk (Park Hae-il) as he tries to unravel the mystery behind the death of his father.

When Hae-guk hears that his father, Ryu Mok-hyeon (Heo Joon-ho), has passed away, he heads to the country to attend his father’s funeral. Upon arriving, however, Hae-guk begins to notice the odd behavior of the townspeople, who seem to worship Cheon Yong-deok (Jeong), a retired power-hungry policeman. When Hae-guk becomes convinced that his father did not die of natural causes, he tries to uncover the story behind the eerie village.

Set in Paris, this film centers around the inner and outer worlds of a nine-year-old girl named Yuki (Noe Sampy), who learns that her parents are getting a divorce. The girl, whose father is French and mother is Japanese, refuses to accept the news, since it would mean that Yuki would have to move to Japan with her mother, leaving behind her father and her best friend Nina (Arielle Moutel). After the girls’ attempt to send a letter from the Love Fairy fails to convince Yuki’s mother to reconsider, Yuki and Nina run away to the woods in the hopes that it will force Yuki’s parents to reconcile. The girls eventually get thirsty though, and Yuki sets off in search of water, only to find a glimmer of a magical light deep in the forest that leads her to Japan. Told almost entirely from a nine-year-old’s perspective, the film blends the painful reality of divorce with Yuki’s refusal to abandon her imagination. 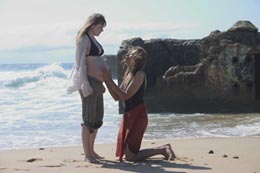 After winning the Special Prize at the San Sebastian International Film Festival, “Le Refuge” has been distributed worldwide. The film explores a variety of themes, from love to drug addiction to pregnancy.

Mousse (Isabelle Carre) and Louis (Melvil Poupaud) were young, beautiful, rich and in love. However, the lovers become involved in a heavy drug scene that eventually leads to Louis’ death. Although Mousse survives, she learns that she is pregnant with Louis’ baby. To escape her hopeless reality, Mousse leaves Paris behind and moves to the country. Meanwhile, Paul (Louis-Ronan Choisy), Louis’ handsome gay brother, comes to visit and ends up staying around.

How to Train Your Dragon (All)

Based loosely on a popular children’s book, this animated film takes place in a mythical Viking village where hunting and killing dragons are considered the only way to win the respect of the tribe. But when the undersized teenage hero of the film, a boy named “Hiccup,” sets off all alone to slay his very own dragon, he finds that he doesn’t have the heart to kill the creature he captures. Instead, Hiccup ends up befriending the dragon, which he names “Toothless,” and soon discovers that the creatures have been badly misunderstood by the tribe. Fun for the whole family, whatever the film is lacking in character development, it more than makes up for with dazzling animation, a surprisingly deep plot and thrilling 3-D sequences.