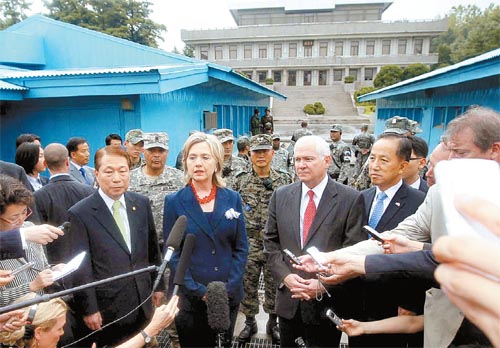 
PAJU, Gyeonggi - The Observation Point Ouellette in the Demilitarized Zone is surrounded on three sides by North Korean territory.

“Do they work hard to make the flagpoles higher?” asked Gates, peering through binoculars at North Korean territory, in which flags were hung on several sides.

“They do, sir,” said Edward Taylor, UN Command Joint Security Area security head, who escorted them. Taylor added that the visitors were standing only 25 meters south of the demarcation line, the de facto border.

“It struck me that although it may be a thin line,” Clinton told accompanying reporters later, “these two places are worlds apart.”

Prior to the official “2+2” meeting in Seoul later that day, Clinton and Gates toured the demilitarized zone, the first visit by American foreign affairs and defense chiefs to the area that has divided the two Koreas since the 1950-53 Korean War.

Adding significance to the visit is its timing, coming after tensions between the two Koreas began to grow in the wake of the Cheonan incident. In Clinton’s case, she was also following in the footsteps of her husband Bill, who called the DMZ “the scariest place on earth” when he visited it in 1993 as U.S. president.

Clinton and Gates said their visit was a show of solidarity for South Korea against the provocation from the North. A total of 37,645 soldiers from the United Nations alliance died during the three-year war and, among them, 33,642 were Americans. About 28,500 U.S. troops are still stationed in Korea.

“As we saw with the sinking of the Cheonan, [North Korea] continues its history of unpredictable and, at times, provocative behavior,” Gates told reporters. “So we are here today not just to show our appreciation for the vital work U.S., ROK and other forces do in maintaining the armistice, but also to send a strong signal to the North, to the region and to the world that our commitment to South Korea’s security is steadfast.”

The four officials then traveled to the War Memorial in Yongsan, central Seoul, where they paid tribute to the 46 deceased South Korean sailors who died aboard the Cheonan.