“Maumi,” the movie that reduced the whole country to tears, is back. This time, the sequel intends to break even more hearts.

Since the last movie, Dong-wuk (Song Joong-ki), now a high schooler, has had to transfer to three different schools, as his reputation as a skilled fighter has always brought trouble. Yet, even through the difficult times, Maumi has stayed loyal to her beloved owner.

But when Dong-wuk’s mother becomes concerned that her son is spending too much time with Maumi, she temporarily sends the dog and her three puppies away to Dong-wuk’s uncle.

One day, two jewelry thieves on the run, Heyok-pil (Seong Dong-il) and Du-pil (Kim Jeong-tae), spot Maumi and her puppies. They hatch a plan to kill one puppy to stuff him with hidden stolen jewels. The plan is on when they manage to nab the youngest puppy, Jang-gun. When her puppy is taken in front of her eyes, Maumi chases the thieves.

When Dong-wuk visits his uncle to see Maumi, he realizes that his beloved dog and her pup are nowhere to be found, and his search for his best friend begins. 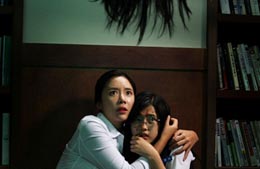 This leading horror movie is back to bring some chills this summer, only scarier.

Woosung High School has a tradition of putting its top 30 students into a special class during summer. Among the 30 students are Sae-hee (Park Ji-yeon), the calm, reserved type; Gwan-woo (Yoon Si-yoon), a popular baseball player; and Na-rae (Park Eun-bin), an energetic swimmer.

At the end of the first day of classes at midnight there is a sudden scream from the library, and a brutally murdered student is dropped from the ceiling. The school is put on lockdown, and everyone on campus is held captive. Then, a mysterious voice makes a life-threatening announcement through the school loudspeakers, declaring that they must answer one question correctly or everyone will die.

As ambitious in scale as it is confusing up close, “Inception” tells the story of an “extractor” named Dom Cobb (Leonardo DiCaprio), who secretly enters people’s dreams and steals secrets from their subconscious mind.

Cobb’s mission grows considerably more difficult, however, after he is enlisted by Saito (Ken Watanabe) to assemble a team of specialists in order to implant an idea into a rival businessman’s mind.

The viewer is then taken into a world where dreams pile on top of dreams, until the division between what is real and what is imagined begins to blur. The film at times is so visually stunning that it is easy to get lost in its intricate structure, and state-of-the-art special effects bring the inner world of the mind to life, often to disorienting and terrifying effect. Written and directed by Christopher Nolan, who is already renowned for his work on “Memento” (2001) and “The Dark Knight” (2008), Inception has been compared to Stanley Kubrick’s “2001: A Space Odyssey” and Ridley Scott’s “Blade Runner.”

The Sorcerer’s Apprentice (All) 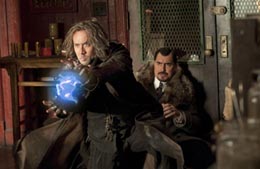 Nicolas Cage returns to the big screen as Balthazar Blake - a 1,000-year-old master sorcerer locked in a fight against evil in modern-day Manhattan - in this Jerry Bruckheimer-produced blockbuster.

Facing a seemingly insurmountable challenge posed by his powerful enemies, Blake needs to enlist the help of a seemingly average college student (Jay Baruchel) who must undergo a crash course in sorcery, with some hilarious mishaps along the way.

Based on a section of Disney’s classic “Fantasia,” The Sorcerer’s Apprentice combines a predictable plot with lots of special effects - not bad for a summer flick.

Angelina Jolie stars as a highly trained CIA officer named Evelyn Salt, who is accused by a Russian defector of being a double agent intent on assassinating the president.

This accusation comes as a surprise to everyone involved, not least of all Salt herself, who must go on a race against time to prove her innocence. Using her years of training to evade capture by the very organization to which she claims to maintain loyalty, she has to find a way to restore her honor without incriminating herself in the process.

Made in the image of earlier Cold War thrillers - but with eerie relevance to recent spy scandals between Russia and the U.S. - Salt is in some ways more reminiscent of James Bond than Daniel Craig himself.

A classic story of spy games and murky motives, Salt is packed with enough heart-racing action for three action films, and the film will keep you guessing till the very end, even if the plot sometimes borders on the absurd.