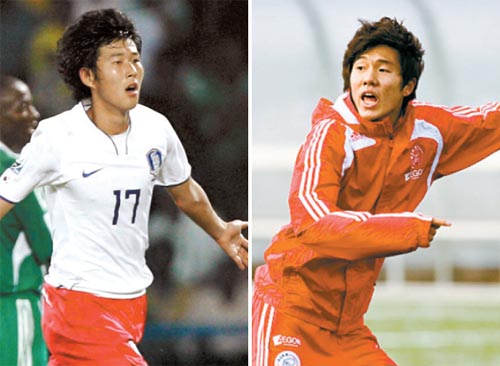 The squad Korea assembled for the recent World Cup in South Africa has been described by observers at home and abroad as the country’s best team to date.

But it could be even better when the next World Cup rolls around in four years.

The consensus among football experts is that the country has all the ingredients to make a deeper run in the 2014 competition in Brazil, as the team can draw from a potent mix of young talent and hot teenage prospects to complement some of its more seasoned veterans.

Stars like Lee Chung-yong, 22, and Ki Sung-yueng, 21, will only get better with age and experience, observers say, while other up-and-coming players are honing their skills with top teams in Europe.

The latter group includes Seok Hyun-joon, 19, who is playing for the Ajax farm team in the Netherlands; Son Heung-min, 18, who has earned a spot with Hamburg in Germany; and Nam Tae-hee, 19, of Valenciennes FC’s developmental team in France.

Additionally, Kim Woo-hong, 15, and Baek Seung-ho, 14, of Real Madrid and FC Barcelona’s youth teams are learning the game in the systems of two of the most recognized football teams in the world.

The centerpiece of the youth movement is Seok, who ranks as the most advanced of the younger players and could become a household name in Korea during the next World Cup. Listed at 190 centimeters (6 feet, 3 inches) and 84 kilograms (185 pounds), he is also referred to as “Bruce Seok Lee” - a reference to the late martial artist Bruce Lee.

AFC Ajax manager Martin Jol gave him the nickname after the young forward trapped a head-level pass from one of his teammates during a team practice by stretching out a leg, which made him appear to be doing a kung fu kick.

Jol was impressed with Seok’s agility and commonly uses the nickname when referring to the player.

“He releases shots close to the goal without any hesitation,” Jol said. “He participates in team training with tremendous focus, as if his life depended on it.”

Seok played in five games with Ajax’s first club last season and did not register a single point, but he managed eight goals and three assists with its development team. With Uruguayan forward Luis Suarez expected to transfer from Ajax to another club, Seok is projected to be promoted to a full-time stint with the main team and possibly even earn significant playing time in the upcoming season.

Seok has made a strong case for a promotion this preseason. During an exhibition match against Chelsea on Saturday, he scored a goal despite being substituted into the match with merely five minutes remaining in regulation. Ajax went on to win the game 3-1. The goal was Seok’s fifth of the preseason, placing him third overall on the team.

Observers also have high hopes for Son of the German Bundesliga.

Son learned the fundamentals of football and honed his skills with the guidance of his father Son Woong-jung, the former manager of Chuncheon FC, until the age of 16. He made an immediate impact upon joining the Yookminkwan Middle School football team in 2007, possessing passing and shooting skills far beyond others in his age group. Observers have attributed that to repetitive fundamental drill sets he practiced for five years starting at the age of eight with his father.

It did not take long for Son to earn his opportunity abroad, as the Korea Football Association selected him in July 2008 to participate in its train-abroad program - just seven months after he started playing organized football. Son then left for Germany to train with the Hamburg club’s youth team.

Having showcased his ability to use both his feet effectively and to play as a forward or in either wing positions, Hamburg offered a formal contract for the primary team.

Son was a crucial part of the youth national team that reached the quarterfinals of the U-17 World Cup in Nigeria last year. The young forward scored a total of three goals in five games. He was promoted to Hamburg’s top squad last month and has been tutored by Dutch forward Ruud van Nistelrooy.

Son has already been tabbed by Hamburg media as a promising player who will become a star in the German Bundesliga.