GNP bounces back in by-election

GNP bounces back in by-election 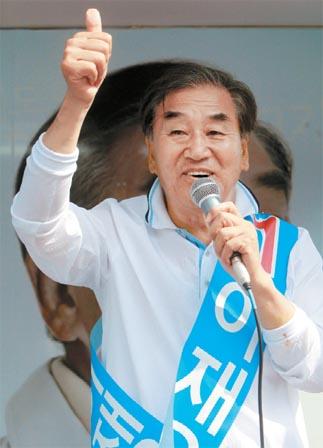 Eight vacancies in the National Assembly were filled through yesterday’s elections, and victories of two advisers of President Lee were confirmed last night in Seoul and North Chungcheong, as well as two more victories in Incheon and South Chungcheong.

The most closely watched race was in Eunpyeong B district of Seoul, where Grand National Lee Jae-oh made a bid to return to politics. The former chairman of the Anti-Corruption and Civil Rights Commission is one President Lee’s closest advisers. His competitor was the Democratic Party’s Chang Sang.

Lee, a 65-year-old former three-term lawmaker, left politics in 2008 after a humiliating defeat in Eunpyeong B by Moon Kook-hyun, then leader of the minor opposition Creative Korea Party.

In an attempt to stop the high-profile GNP politician’s return, two liberal candidates dropped out of the race at the last minute and backed Chang, the 71-year-old former president of Ewha Womans University.

The opposition’s unity in the campaign, however, fell short of stopping the president’s adviser and core member of the pro-Lee Myung-bak faction of the GNP from making a grand political return. Lee Jae-oh’s comeback is expected to solidify the faction’s power within the ruling party. 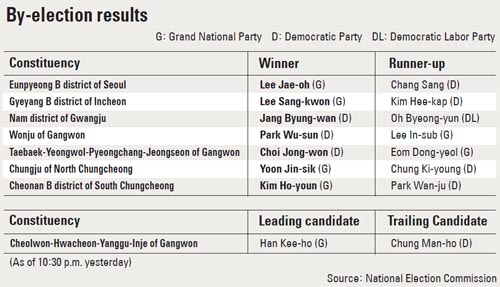 In Chungju, the victory of Yoon Jin-sik, former chief policymaker at the Lee Blue House, over his Democratic rival Jung Gi-young appeared to be a sure thing. As of 9:40 p.m., with 53.8 percent of the ballots counted, Yoon had scored 65.06 percent, while Jung had received 34.93 percent.

The victories of the Lee advisers were seen as a public endorsement of President Lee for the rest of his term - and a sharp rebound from the June 2 local election setback for the ruling party. The president is trying to push forward his signature projects, including the four major rivers restoration project despite the opposition parties’ fierce protests.

Grand National candidates also won elections in Cheonan B of South Chungcheong and Incheon, making it clear that the voters wanted checks and balances in state affairs.

According to the National Election Commission, 465,190 out of 1,364, 999 eligible voters in eight electoral districts cast ballots, and total voter turnout stood at 34.1 percent.

As the locations were spread nationwide, the by-elections were seen as a gauge of public sentiment across the country.

The GNP’s wins were particularly striking because opposition parties have traditionally enjoyed victories in by-elections in Korea.

And of the eight seats filled yesterday, only one had been originally occupied by the ruling Grand National Party. In other words, the elections took place in opposition strongholds.

“We will interpret the outcome as the voters’ support for the Grand National Party to work harder,” GNP Chairman Ahn Sang-soo said last night.

The Democrats were clearly disappointed. Party officials’ faces became tense as the vote count progressed. Reflecting such a mood, DP Chairman Chung Sye-kyun only visited the party’s headquarters around 10:10 p.m. “I and the party’s leadership did our best,” Chung said. “We humbly accept the outcome.”