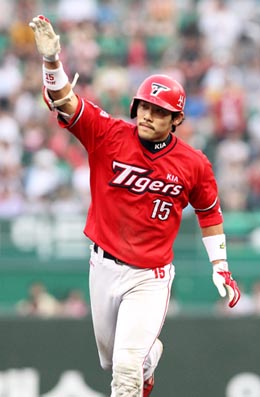 Lee Yong-kyu of the Kia Tigers is playing the best baseball of his career.

The 25-year-old outfielder is known as a contact hitter with some speed to boot.

But he has added some long-absent power to his game as of late.

Last Thursday, Lee had a record-setting day offensively against the Lotte Giants.

With the game deadlocked at a scoreless tie in the third inning, Lee hit a three-run homer against Giants’ starter Lee Jae-gon - his first since the 2006 season.

In his next at-bat in the same inning, Lee smashed the first career grand slam of his career to post a record seven RBI in a single inning.

He then drove in another run in the eighth inning to tie the KBO record for the most RBI in a game.

Lee continued his offensive tear on Sunday, hitting a solo homer off southpaw Kim Kwang-hyun of the SK Wyverns.

“I was lucky,” Lee said. “I decided not to focus so much on trying to hit home runs and I think that has actually played in my favor.”

A prototypical leadoff batter who hit primarily to make contact and produced steals in bunches, Lee has never had more than five home runs in a single season and hadn’t produced one in three years.

In an attempt to add some pop to his bat, Lee worked on tweaking his batting stance in the offseason.

The move didn’t pan out as expected, and Lee actually got worse.

His batting average plummeted to the .100 range, and he was often slotted in the bottom of the Tigers’ batting order.

Lee then decided to tweak his batting stance again, primarily by shortening his swing.

This time it worked. His batting average has marched upward since then, and he is now among the best in the league at producing hits.

Lee currently sits 10th in the KBO in batting average with a .313.

Having reached his goal of improving his hitting, Lee now is focused on regaining his reputation as a threat on the base paths.

Lee had 13 steals this season as of the end of June, but he stole six more in July alone. He added another two against the SK Wyverns on Sunday.

“After injuring my ankle last season, I was hesitant and not aggressive as a runner,” said Lee. “Lacking confidence, I would take big leads before being thrown out on a few occasions. I now want to regain my confidence and reach at least 30 steals this season.”

With Lee producing at the top of the batting order and last season’s MVP Kim Sang-hyun back in the lineup, Kia’s offense has come to life.

The defending champions finished the first half of the season in sixth place in the league standings ? losing 16 consecutive games at one point.

But the club has started the second half with a record of four wins and one loss. Kia now sits four games back of the fourth-place Lotte Giants, well within striking distance.

“Having started my offseason workouts early, I’m not concerned at all about my conditioning,” said Lee. “As long as we’re in contention for the fourth and final playoff spot, I will continue to produce at the plate and around the base paths.”

Lee made his KBO debut with the LG Twins in 2004 and was traded to the Kia Tigers the following season. He was on the 2008 Beijing Olympics gold medal-winning team and the 2009 World Baseball Classic squad, which finished second in the competition.