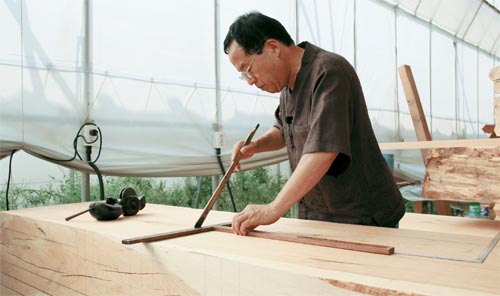 Master carpenter Shin Eung-soo measures a piece of wood. Shin led the team that restored Gwanghwamun and will begin working on Namdaemun this fall. Provided by Shin Eung-soo


The restoration of Gwanghwamun would not have been possible without Shin Eung-soo.

Shin has worked on buildings at Gyeongbok Palace for the past 20 years, but perhaps his most visible achievement yet will be unveiled on Aug. 15, when the gate known as Gwanghwamun is unveiled to the public once again.

In an interview with the Joong-Ang Daily on Friday at his office in Tongui-dong in Jongno, central Seoul, Shin refused to be called “director” because he said it sounded like a title for an executive, not a ma

ster craftsman. His official title translates to “head carpenter,” but the Korean term, daemokjang, has royal connotations going back to Korea’s Joseon Period (1392-1897).

As he spun the tale of Gwanghwamun’s restoration, Shin singled out the curved lines that can be found in many of the gate’s details - especially the eaves curving toward the sky - as his favorite parts.

Recreating those curves had been quite a struggle. A few months after construction began, Shin and his team were aghast to find that one of the aging photographs they had been using as a reference was actually of Dongdaemun, the east gate on the old Seoul city wall, and not of Gwanghwamun after all.

A member of Shin’s team discovered the mix-up after he spotted a flower pattern unique to Dongdaemun in the photo. Shin was forced back to the drawing board on many of the details of the gate.

It’s fairly easy, the craftsman said, to get the structures confused when examining very old records.

“Patterns may seem the same to laypeople, but from gate to gate and palace to palace, each has its own unique patterns,” he said.

Once the designs were finally set, Shin personally selected the pine trees that would be used for the upper structure of the gate.

According to Shin, the pine tree is perfect for rebuilding historical landmarks, because pine resin keeps the body of the wood from decomposing and warping as it dries.

“Pine is the only type of tree that can last for more than 1,000 years when used in wooden buildings,” said Shin.

Shin hopes the wood will last for at least three generations, so that his successors can continue using the land for their restoration projects centuries in the future.

The purchase of an entire forest might cause consternation in some families, but Shin’s obsession with history is a family affair. Two of his five children are already following in his footsteps.

Shin’s oldest son runs a lumber mill in Gangneung to supply his father with quality wood, and a younger son is building traditional Korean homes near the National Assembly building in Yeouido.

Shin’s cousin inspired him to became a carpenter in 1956. Soon after, he started working on the restoration of Namdaemun in 1962.

While there, he made his first contacts in the world of cultural restoration.

His next project after Gwanghwamun will take him back to where he began: he’s scheduled to lead the next restoration of Namdaemun starting this fall.

“I want more children who are not familiar with Korean history to use the reopening of Gwanghwamun as a chance to learn more about their legacy and heritage,” said the craftsman.