Busan event is saved by the music

Busan event is saved by the music 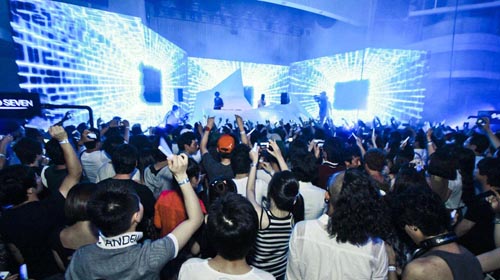 Emcee Verbal of M-Flo and Fantastic Plastic Machine spin at the event by @Blue Spirit in Busan on July 31 at Haeundae Grand Hotel. Provided by @Blue Spirit


The two Japanese artists invited to play for Seoul-based event organizer @Blue Spirit’s Busan debut kept the music going until 4 a.m. - but by the end of the night they were playing to a sparsely populated room.

Choi Sung-chul, one of the event promoters, said they expected to have an audience of more than 2,000 people, but that things didn’t turn out quite as they’d planned.

“It was different from what we expected,” said Choi.

The organizers, who have put together many successful events at various clubs in Seoul, had hoped to see the event become the first in an annual summer series, but it looks like they’ve still got some work to do before they take their show on the road.

On the day of the event, July 31, the staff discovered that there weren’t enough advance reservations to fill the venue, the Haeundae Grand Hotel, so event promoters hit the beach to distribute free tickets for the event.

Their efforts paid off. Around 11 p.m., there were so many people with the free tickets that it was hard to get close to the stage.

However, the audience got tired of waiting for the show to start, and they started leaving an hour later. By the time things finally got going at around 1 a.m. the crowd had thinned significantly.

Despite the staff’s lack of organization, the artists put on a great show.

Things got started with a performance by Revolver 69, featuring actor Ryu Seung-bum (of the 2010 MBC drama “Pasta” and the 2007 film “Radio Dayz”).

The headliners - Emcee Verbal of the Japanese hip-hop group M-Flo and Fantastic Plastic Machine - provided partygoers with a good introduction to what’s hip and hot in Japan.

M-Flo has released five studio albums, all of which have gone to the top of the charts in Japan, including their most recent, “Cosmicolor” from 2007. The group has collaborated with a wide range of artists in genres including jazz, which has given their music a unique sound. Verbal is a third generation Korean- Japanese musician raised in Japan and one of the biggest names in Japanese hip-hop.

Fantastic Plastic Machine is the solo project of the Japanese electronic music artist Tomoyuki Tanaka, whose eclectic music draws on bossa nova, lounge music and other genres. He has released seven albums, including “FPM” from 2009.

The artists kept crowds engaged with witty comments and by throwing out signed rubber balls and paper airplanes.

During his set, Verbal would write something such as “Are you having fun?” on a giant sketchbook and show it to the crowd, which induced big shouts of “Yes” that reverberated throughout the venue.

Before Verbal and FPM got on stage, the dance floor was almost half empty. But when they started spinning, the crowd poured out onto the floor, unable to resist the zeal and enthusiasm on the faces of the two artists.

Despite the problems, the organizers’ efforts to spread underground music at a popular vacation spot were well worth it.

However small it was, the audience appreciated the music, and I can’t help but think that those who left would have liked it, too.

Since @Blue Spirit plans to make this summer event an annual one, the staff is expecting to be more organized next time around so they can bring more people into this vibrant music scene.