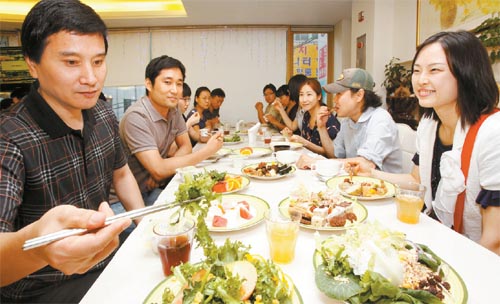 Recently Kim Ji-sook, 26, confessed to her boss that she is a vegan. Ever since, she said, he’s made her feel like a member of a strange cult.

“During break time, he would often buy us pizza or chicken. When I said that I don’t eat meat, he [Kim’s boss] said ‘At least pretend like you are eating some then, for the sake of the team,’” she said, with a disapproving huff. “I ended up having to eat a slice, just to please him.”

Lee Eun-mi, also 26, feels the peer pressure without anything being said. She confessed to being insecure about herself in social settings involving food.

“When I’m meeting friends, I catch myself constantly questioning my actions, like, do they think I’m deliberately trying to be eccentric? Do they consider me picky, stubborn or stuck up?” said Lee, picking up a dumpling with her chopsticks at Loving Hut, where the two were having lunch with other members of the Korea Vegetarian Union. Loving Hut is a vegetarian buffet near Achasan Station in eastern Seoul.

The comments from both women brought empathetic nods from the other 10 or so members present at the weekly meeting. Members agreed that the hardest part of being a vegetarian in Korea is not trying to achieve a well-balanced diet or even finding vegetarian food but vegetarian food but the social stigma of standing out from the crowd.

With Korean tradition often demanding that office workers on business outings leave the ordering to the boss and other social norms, vegetarians in Korea are extremely rare. Although there is no official data on the exact number of vegetarians in Korea, industry estimates - including those by leading local vegetarian groups such as the KVU and the Vegetarian Practice Association - put the Korean vegetarian population at less than 1 percent of the country. That’s compared to around 3 percent across the world, around 5 percent in the United States and around 8 percent in Britain, according to the same sources.

“I’ve seen people quit jobs or break off relationships because being vegetarian made them a sort of pariah,” said Lee Won-bok, a proud vegan for 20 years and head of the KVU. The group, which started in 2000 as one of the first vegetarian communities in the country with around 20 to 30 members, is Korea’s only registered, non-profit vegetarian organization. It currently has more than 17,000 members.

“There is a certain group mentality in Korea, in which people tend to want to conform to what everyone else is doing and not ‘make a scene,’” he explained.

According to Lee Won-bok, the No. 1 reason KVU members have for turning vegetarian is for their health. “Around two-thirds of our members say they became vegetarian initially for practical reasons, including to battle cancer or high cholesterol, lose weight or to fight acne. The rest say that they made the change because of ethical reasons, whether to fight for animal rights, for religious reasons or to protect the environment,” Lee said.

After turning vegan, Kim Ji-won, 21, a student, said that she is slimmer, her acne has cleared up and, most importantly, she is no longer depressed. “I first thought of becoming vegan after reading ‘Skinny Bitch,’” a book on veganism written by Kim Barnouin and Rory Freedman, she said.

Kim said that after only a few months of following a vegan diet, she lost 4 kilograms (9 pounds) and that over 90 percent of what she said was “severe acne” had disappeared.

“I used to have a bit of clinical depression. However, after becoming vegan, I felt myself become more optimistic.”

Some medical professionals warn, however, that becoming vegetarian or vegan is not a cure-all solution, and that especially for young children, cutting out certain food groups might do more harm than good. “For growing children, a vegan diet would make it hard for them to get enough nutrients for stable physical development, particularly calcium and vitamins B12, B6, B2, A and D,” said Chang Namsoo, a professor of nutrition at Ewha Womans University.

Chang added that for all vegetarians, especially vegans, it is crucial to get regular health check-ups and consult with a doctor to maintain a well-balanced diet. 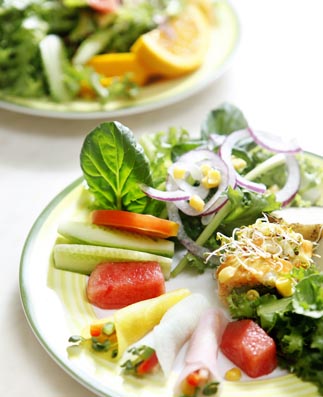 Top, the Korea Vegetarian Union meets at The Loving Hut, a vegetarian restaurant near Achasan in eastern Seoul. KVU head Lee Won-bok is seated at left. Above, a plate of vegetarian hors d’œuvre from Loving Hut. By Oh Sang-min

Although they remain a tiny minority, three events or trends in modern Korea have led to a growth in public awareness of vegetarians. One of the first was the “New Start” movement led by Dr. Sang Lee, a medical doctor and a member of the Adventist Church, during the 1990s. Sang compared eating meat to taking poison, and said that it could result in cancer and other terminal diseases.

While this movement centered on the supposed physical dangers of meat consumption, the ever-popular “well-being” trend of the early 2000s propelled public recognition and interest in vegetarianism and organic food to new heights.

Vegefood, one of the first online shopping sites to feature vegetarian options, including veggie burger patties and vegan bread, was established in 1998. Kang Duk-gu, a manager at the company, said that during the early 2000s, sales soared more than tenfold. Also during this time, vegetarian restaurants, including SM Vegetarian Buffet and a New Start-branded chain, started popping up one by one.

More recently, the 2008 controversy surrounding U.S. beef imports drove a media frenzy about mad cow disease, while at the same time news of the spread of avian flu and Influenza A (H1N1), or the so-called “swine flu,” led to unfounded fear of meat in general.

Kang said that in 2008, during the height of the beef controversy, the shopping site saw three to four times more visitors than in previous months. The Korean Vegetarian Union also drew in around 4,000 new members within the space of one or two months in 2008.

Still, aside from that one year, Korea’s meat consumption is steadily climbing.

“Starting in the 1980s, Korea’s meat consumption saw a rapid rise. Although the country started out with a strong foundation in agriculture, industrialization, fast economic development and Westernization turned the cuisine meat-centered,” said Ko Yong-seok, head of the Vegetarian Practice Association and a food columnist.

According to the Korea Meat Industries Association, the average meat consumption in Korea has been increasing 7 percent on-year since the late 1980s. Data from the Agriculture Ministry shows that meat consumption per capita grew from 19.9 kilograms on average in 1990 to 35.6 kilograms in 2008, almost doubling in less than 20 years.

“They say that after the mad cow disease fiasco in the mid-1990s in Britain, an average 1 million Brits per year turned to a vegetarian diet.

When she was in middle school, Park Eun-sook found herself caught up in a heated argument with her friends over the morality of eating dog meat, a traditional Korean delicacy. Right then and there, she decided to stop eating meat. Today, Park is the director of the ERL Gallery and a pescetarian, someone who eats seafood but no other meat.

She is so dedicated to animal rights, in fact, that her dog is also fed vegetarian meals as well. “If we don’t take care of other species living on this planet with us, what does all our success and development mean?” she said.

In recent years, some high-profile Koreans have started to speak out on animal rights. Last May, film director Im Soon-rae, a vegetarian whose hit films include “Waikiki Brothers” (2001) and “Three Friends” (1996), became head of Korea Animal Rights Advocates.

Last November, she held a press conference at the National Assembly to protest against broadcaster MBC’s TV show “Hunters,” which she said depicted the hunting of wild boars in an unnecessarily inhumane way.

Protecting the environment has become another important issue among vegetarians here. Kim Eun-jin, 29, who until last year worked for the Korean Women’s Environmental Network, argues that water shortages, global warming and pollution around the world were being exacerbated by people’s reliance on meat.

“A fully grown cow is around 450 kilograms. To raise this cow, the amount of water needed is around the same amount that is needed to float a whole aircraft carrier,” said Kim, who has been a vegetarian for three years.

Kim’s argument is echoed in numerous worldwide campaigns and initiatives on environmental protection. A United Nations report in 2006 proclaimed that “cattle-rearing generates more global warming greenhouse gases, as measured in CO2 equivalent, than transportation.” It added that 9 percent of CO2 deriving from human-related activities come from livestock farms.

Ko Yong-seok said that any environmental activist who eats meat is missing the core of the problem. “The bottom line is that it takes much more money, energy and land to factory farm animals than it does to grow the same amount of vegetables and fruits,” he said, adding that an average of 53 square feet of rainforest in South America is destroyed to make one hamburger patty. In fact, last year, Nike announced that it will no longer purchase leather made by cattle ranchers in deforested Amazon rainforest.

Whether for animal rights or environmental protection, Ga Chang-jin, 30, a vegetarian and employee at organic food company Hansalim, said that becoming a vegetarian has allowed him to understand the challenges of being a minority. “Before becoming a pescetarian six years ago, I had no interest in minority movements such as the gay movement, or animal rights and environment issues. But now that I also see myself as a ‘minority’ as a vegetarian in Korea, I have come to grasp what it feels like to be different, of trying to voice my opinion when the majority of society doesn’t want to listen to it.”