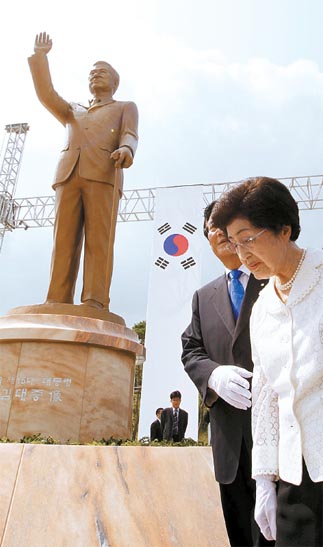 A statue of former President Kim Dae-jung is unveiled near his hometown in Muan, South Jeolla, yesterday ahead of the first anniversary of his death. The unveiling ceremony was held at a park in front of the South Jeolla Provincial Government Office with Lee Hee-ho, the former first lady, right, and some 300 government officials, politicians and close aides in attendance. Kim, who served as president from 1998 to 2003, died from complications of pneumonia last Aug. 18 at the age of 85. The bronze statue features the Nobel Peace Prize winner holding a cane in his left hand, symbolizing the hardships he endured while pushing the pro-democracy movement forward. Below the monument, a carved inscription reads, “Acting Conscience,” along with his words and accomplishments. [YONHAP]