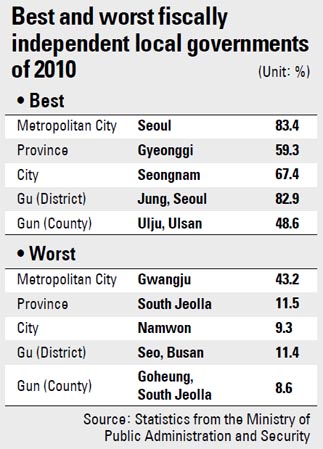 Citizens beware: With Seoul and other municipalities across the nation struggling with budget shortfalls, cutbacks are being made that will be felt in both small and big ways.

The Seoul city government, for example, plans to temporarily halt its Han River waterway construction projects. The city announced yesterday that it would re-examine all major projects, including the underground road network, which was set to start this year with a budget of roughly 1 trillion won ($842 billion).

All noncritical road maintenance projects will be halted indefinitely, and the city government is in negotiations with the Seoul Metropolitan Council to raise subway fares to reduce debt produced by Seoul Metro. Seoul citizens are likely to pay 100 to 200 won more for subway rides in the coming months.

The moves are meant to reduce debt and strengthen the city’s fiscal stability.

The city administration hopes the decisions will reduce Seoul’s debt - which currently measures 19.5 trillion won - to 12.7 trillion won by 2014.

The city will issue 680 billion won worth of municipal bonds this year to keep Seoul’s debt from growing any further, instead of the originally planned 980 billion won.

To forestall a financial crisis and to promote growth, the city plans to redeem by 2014 all 1.8 trillion won worth of municipal bonds issued from 2009 to this year.

Seoul currently holds the best fiscal independence rate in the country, at 84.4 percent.

Other provincial and local governments have made cutbacks as well, by either cutting down or stopping projects altogether.

A waterway project to restore water life in Daejeon has been halted indefinitely.

“We need 23 billion won that we do not have for labor and welfare costs, giving us no choice but to stop the project because we cannot come up with money for the project,” said Park Yong-kap, the district head of Jung, Daejeon.

The project to restore a waterway beneath a road in the region had an initial budget of 50 billion won and came to a grinding halt on July 19 when the government failed to procure funds.

The local government in Anyang, Gyeonggi, decided at the end of July to cancel its purchase of the grounds of the National Veterinary Research and Quarantine Service, which is planning to move elsewhere.

The city had signed a contract with the institution in May for 129.2 billion won but Anyang’s mayor announced last month that the purchase could “hinder new ongoing projects, such as free lunches for elementary school students.”

Kim Hak-kyu, the mayor of Yongin, Gyeonggi, recently decided to re-examine an English village project that had been pushed by his predecessor. Originally set to be completed by 2012 the project burdened the city with a construction budget of 44 billion won.

Local festivals are not exempt from the cuts. The annual butterfly festival in Hampyeong, South Jeolla, for example, will be scaled down along with the budget for an insect exposition in Hampyeong in 2013.