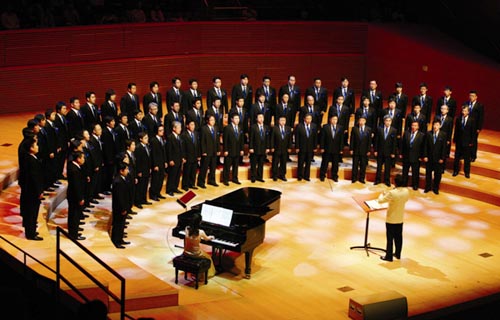 The Soongsil OB Male Choir will perform at Seoul Arts Center on Aug. 31. See Music below. Provided by Music Plus

THE BIGGEST HAPPINESS FROM THE ORCHESTRA: LEONARD BERNSTEIN’S YOUTH CONCERT

Today: Leonard Bernstein’s Youth Concert.” This concert for youth is divided into three parts organized around the music theory work of Leonard Bernstein. In part one, “What does music mean?” the William Tell Overture by Gioacchino Rossini and Don Quixote, Op. 35, Variation II by Richard Strauss will be played. Mozart’s variations on the tune that would later be used for “Twinkle, Twinkle, Little Star” will be used in part two, “What is the sonata form?” Part three, “Humor in Music,” will include symphonies No. 94, “Surprise,” and 45, “Farewell,” by Joseph Haydn. The concert starts at 8 p.m. Tickets range from 15,000 won to 45,000 won.

Saturday and Sunday: For beginners in classical music, this festival offers popular pieces that the entire family can enjoy together. On Saturday, the Wonju City Chamber Orchestra will perform Tchaikovsky’s “Polonais” from the Opera “Eugene Onegin” and Piano Concerto No. 1 in B minor, Op.23. On Sunday, the Prime Philharmonic Orchestra will perform Antonin Dvorak’s Cello Concerto in B minor, Op. 104 and Sergei Rachmaninov’s Symphonic Dances, Op. 45. The concerts start at 4 p.m. Tickets for youth are 10,000 won, while adults are 15,000 won.

Tuesday: This concert is subtitled “Tango One Summer Night.” Mixing the sounds of the clarinet, violin, viola, guitar, piano, cello and bass with human baritone, tenor and soprano voices will give the audience a chance to get away from urban life and feel the exotic atmosphere.

Aug. 29: This concert series was started in 2006 by composer No Sun-rak. The idea is to expand the range of Korean choral music so that it can appeal to a broader audience. The gala concert targets new, creative figures in choir music.

Aug. 31: This all-male choir presents a performance divided into six themes: “Dream of Men,” “Passion of Men,” “Jesus of Men,” “Nostalgia of Men,” “Tears of Men” and finally “Love of Men.” Cello and piano accompaniment will be added to “Passion of Men”and “Jesus of Men” to complement the vocals. The concert starts at 8 p.m. Tickets range from 20,000 won to 50,000 won.

AUGUST HAPPINESS ON A THOUSAND WON: MUSIC, BEYOND THE BOUNDARY

Sunday and Monday: On Sunday, Korea’s first singer-songwriter, Han Dae-soo, will perform the last concert of his career with Gansane and Lee Sang-eun. Then, on Monday, Korean rockers the Yoon Do-hyun Band will perform with other rock artists. The concerts start at 7:30 p.m. Tickets cost 1,000 won.

Monday: The Trio Farbe, which gave its first concert last year, consists of three graduates of the Seoul National University music department, active international performers on the piano, violin and cello. “Farbe” means color in German, and the group says it chose the name to reflect the different tones musical instrument can create, then blend together in harmony, just as three primary colors can be mixed to create any other color.

Aug. 27: This concert’s theme is “nostalgia,” a feeling that performers will try to express through various musical genres including opera arias, movie soundtracks and Korean folk songs. Nostalgia for one’s hometown and for memories of loved ones will all combine in the hands of the Rime Opera Ensemble. The concert starts at 7:30 p.m. Tickets range from 20,000 won to 50,000 won.

Aug. 31: To commemorate the 200th anniversary of the birth of composer Robert Schumann, the Schumann Chamber Music Festival features five concerts, each focused on a different type of work. This third concert, titled “Romance,” will include music depicting the marriage with Schumann and pianist Clara Wieck. The younger composer Johannes Brahms would later grow to admire Clara until she died.

Sept. 1 to 12: The original play by William Shakespeare is moved to Korea’s ancient Three Kingdoms Period, with the new setting inspired by the “Samguk Yusa,” or “Memorabilia of the Three Kingdoms,” a contemporary history of the period. The prominent Korean Theater figure Oh Tae-suk directs.

To Sunday: This play tells the story of a family that lives in a frequently war-torn country. On the day a peace agreement is to be announced, the family is deeply disappointed since they were secretly in the process of building a private air raid shelter that they were going to open to the public once the war began. The story unfolds as the family tries to keep their shelter safe.

Performances start at 8 p.m. on weekdays, at 4 and 7 p.m. on Saturdays and at 4 p.m. on Sundays. There are no performances on Mondays.

Thursday: A variety of traditional Korean forms go on display at this concert, including the ancient compositional form the sujecheon, taepyeongmu dance, pansori storytelling and samulnori percussion, along with enjoyable traditional orchestral music accompanied by Chinese traditional dances and a cello ensemble.

The second show will feature traditional gugak music. Both concerts start at 5 p.m. Ticket prices range from 10,000 won to 20,000 won.

SING TOGETHER WITH TEACHERS - LOOKING FOR OUR MELODY

Friday: “Sing Together With Teachers,” which will be presented by the Seoul Metropolitan Junior Chorus, includes pieces found in school music textbooks with commentary by the beloved young actress Ji Jin-hee, who appeared in the TV show “High Kick Through the Roof.” Won Hak-yon conducts. Although the main portion of the concert will consist of minyo (traditional Korean folk songs), it will also be a great opportunity for the audience to enjoy various forms of traditional music such as taryeong ballads, the bukcheong lion dance and samulnori.

Aug. 26 and 27: “Taekwon Mumu Dalha - The Moon” is a non-verbal performance that combines the martial art of taekwondo and the beauty of traditional dance. It follows the mythical origin of taekwondo and its spiritual meaning in the history of the Korean people. It begins before human history with the birth of a man, a woman, and the gods and goddesses of heaven, earth, water and fire. The story tells of the love between the man and the woman, the struggle for survival that comes between them and the birth of new energy and life through the battle between good and evil. With a beautiful set and a story that vacillates between fierce action and flowing lyricism, this is a unique take on Korean culture. The performance starts at 7:30 p.m. Ticket prices range from 20,000 won to 50,000 won.

From Seoul, take subway line No. 1 to Uijeongbu Station.

Aug. 26 to 28: This event, also known as Ad Stars, is the culmination of months of voting on the year’s best ads by judges and netizens. The final pieces that pass the intense online screening process vie for awards, while seminars and speeches explore and encourage growing cultural diversity and creativity in Korean advertising. It’s also a major networking opportunity for anyone involved in the local advertising industry.

From Seoul, take a KTX train to Busan Station, then take Busan line No. 1 to Seomyeon Station, transfer to Busan line No. 2, and take it to Dongbaek Station. Leave through exit 1, walk straight until you reach the Ocean Tower Health Club and turn left. The hotel will be on your left.

Aug. 27 to 29: The city of Daegu will puts on its colorful birthday suit for an event with the world’s top body painting artists. As the masters compete to create the most beautiful design on the human canvas, visitors can join in by getting face paintings or nail art. Since body painting requires cleaning off the paint at the end, various skincare products will be introduced as well. Musical performances will also take place, along with a spectacular fireworks show.

From Seoul, take a KTX train from Seoul Station to Daegu Station. Then board Daegu subway line No. 1, transfer to line No. 2 at Banwoldang Station, and get off at Duryu Station. Walk south to Duryu Park.

*Some information was provided by the organizers of the events.