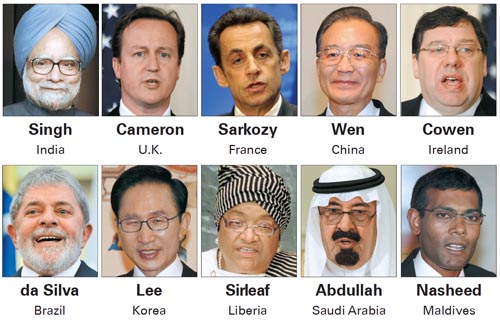 Korea is the 15th best country in the world, according to Newsweek magazine, and President Lee Myung-Bak is one of ten world leaders who “have managed to win serious respect.”

In a special issue, the U.S. newsweekly wrote, “[We] set out to answer a question that is at once simple and incredibly complex - if you were born today, which country would provide you the very best opportunity to live a healthy, safe, reasonably prosperous, and upwardly mobile life?”

With advice from an advisory board that included Joseph E. Stiglitz, the 2001 Nobel Prize-winning economist at Columbia University, the periodical ranked 100 nations according to five categories of well-being: education, health, quality of life, economic dynamism and political environment. Data from 2008 and 2009 were used for the rankings.

According to the magazine, Finland is the best country in the world, followed by Switzerland, Sweden and Australia. Japan was ranked 9th, the highest among Asian countries, and the United States ranked 11th. 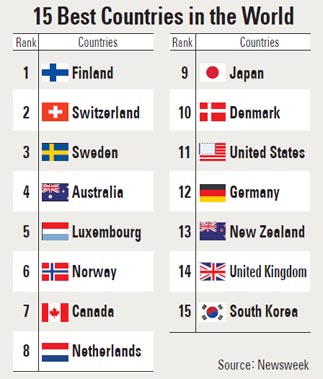 In specific categories, Korea ranked second in education, with a 97.9 percent literacy rate and 14.3 years of average schooling for its citizens.

Korea also ranked third in economic dynamism, after Singapore and the U.S.

“South Korea has the strong corporate sector and open markets needed to claim the top spot [among medium-size countries],” the magazine said.

However, Korea didn’t do so well in three other categories: Korea ranked 23rd in health, 29th in quality of life and 19th in political environment.

In a separate feature on national leaders, Newsweek put President Lee seventh on a list of leaders who “managed to win serious respect.” Newsweek described Lee as the “CEO-in-Charge” who helped Korea get through the global financial crisis faster than any other developed country. Other leaders included Maldives President Mohamed Nasheed and Saudi Arabia’s King Adullah bin Abdel Aziz al-Saud.