More a throwback to the glory days of action than a modern-style CG shoot-em up, Sylvester Stallone’s “The Expendables” brings together the biggest - albeit aging - names in the genre from the last three decades and gives them more than enough sticky action-film style situations to try to get out of.

The film might pique your interest just for the fact that it features Stallone, Bruce Willis, Arnold Schwarzenegger, Jet Li, Jason Statham, Mickey Rourke and Dolph Lundgren, many of them now in their 50s and even 60s, doing a lot of running, shooting, punching and killing.

The plot itself - which probably won’t win any awards - involves Barney Ross (Stallone) leading a band of misfit mercenaries (the rest of the cast) on a mission to dispose of the tyrant dictator of a South American island nation. On their way they meet up with a local freedom fighter and find out the true nature of their mission to take down General Gaza.

While most reviews are mixed, it might be worth it just to see these old guys banter, blow things up and generally cause lots of mayhem. 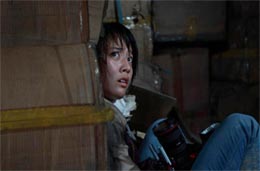 Six curious people who dared step into a “pyega” (deserted house) have evaporated into thin air. The last trace of them was recorded on a videotape retrieved at the site and “digitally restored” for the audience.

With this as his conceit, director Lee Cheol-ha presents us with a mockumentary of “Blair Witch Project” style horror films in an abandoned house in Gyeonggi.

The interviews with the residents nearby add color to the fake documentary, and the off-focus and constantly shaking camera work creates an anxiety-stricken and restless ambience. The dilapidated door, rusty windowpanes, eerie clothes hangers and everyday objects thrown here and there make one think twice about the idea of “home.”

Rumor has it that during the filming, the crew and actors suffered from coincidental injuries and unexplainable frights.

For most gamblers, their nighttime activity offers a thrill and intensity absent in their mundane everyday lives. For Kaiji (played by Kenichi Matsuyama), however, it is a risky business of life or death. In order to pay off a large debt, this not-quite-everyman jumps into the dangerous world of gambling to win it all or lose it all. The stakes are lifetime enslavement underground. Desperate, Kaiji boards a boat called “Hope” along with other debt-ridden losers. There the challenges begin with a simple game of rock-paper-scissors, but then quickly progress to a tightrope walk between two skyscrapers and other dangerous stunts. Kaiji participates with the utmost zeal and concentration, hoping that he will be rewarded with his freedom in the end.

Based on Nobuyuki Fukumoto’s popular manga series and directed by Toya Sato, the movie depicts the story of a man struggling both physically and psychologically to rise from the gutter of society and build a new life, while commenting on modern reality television culture.

The Last Airbender (all) 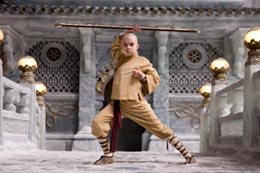 In the latest in a string of disappointing M. Night Shyamalan films, “The Last Airbender” is set in a fantasy world under the oppressive rule of the Fire Nation. The other nations - Earth, Air and Water - must turn to a child messiah named Aang, who has the ability to manipulate all the various elements, though he must learn to “bend” them first. Adapted from an animated television show on the American children’s network Nickelodeon, Shyamalan’s film was shoddily converted to 3-D at the last minute. It has also received criticism for casting white actors in roles inspired by Asian mythology. Grab a pair of 3-D glasses only if you’re in the mood for visual trauma, uninspiring dialogue and a front row seat as Shyamalan becomes even more irrelevant as a Hollywood director.

Based on the infamous Stanford Prison Experiment of 1971, in which seemingly normal male undergraduates were assigned roles as prisoners and guards in a psychological test that quickly spiraled out of control, “The Experiment” is an American remake of a 2001 German film of the same name. Starring Academy Award winners Adrien Brody and Forest Whitaker, it tells the story of 26 men whose voluntary participation in a behavioral experiment in a state penitentiary quickly unleashes aggressive behavior by the simulated guards and prisoners alike. The results of the real-life study have been used to explain how seemingly inhuman acts are perpetrated by otherwise normal people, suggesting that violence and obedience to authority are a product of institutional structure rather than individual personality.