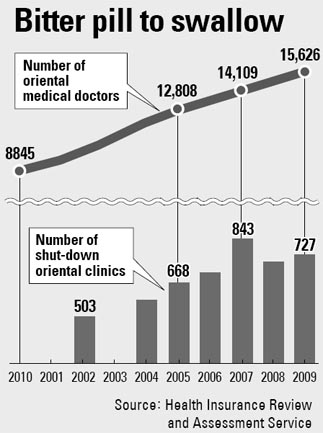 Although Korea has swiftly recovered from the financial crisis that broke out in 2008, oriental doctors and clinics are struggling for a variety of reasons: a boom in doctors and clinics, high costs and safety fears about medicines from China.

“When an elderly patient visits orthopedics and receives physical therapy, it only costs him around 1,500 won ($1.26) [with insurance],” said the head doctor of an oriental clinic in Gangnam that closed down in September last year after operating for the past six years. “However, if he visits an oriental doctor and receives acupuncture treatment, moxibustion and other oriental treatments, it costs at least 6,000 won. Patients complain that it is too expensive to come to an oriental clinic.” Patients are also increasingly worried about the safety of traditional oriental herbs, especially when they’re sourced in China.

“After regulations on heavy metal content in medicinal herbs got reinforced in 2005, there were many reports on herbs that didn’t meet the standards,” said a source at the Ministry of Health and Welfare. “Such reports heightened fears toward oriental medicine and cooled the demand for such practices.”

“I heard that some medicinal herbs are imported from China,” a 46-year-old housewife said, “and they don’t go through proper inspection before being made into medicine.”

“The government not certifying the safety of medicinal herbs made things very difficult for oriental doctors,” said Kim Jeong-gon, President of the Association of Korean Oriental Medicine. Another problem for the doctors is that a variety of medicinal supplements, such as red ginseng extract and glucosamine, have been available without prescription since 2002. These supplements were once prescribed by oriental doctors.

Four or five years ago, parents wanted their children to take medicine containing deer antlers, especially in the spring and fall, according to Oh Su-seok, head doctor at Inbo Oriental Clinic in Gwangju, Gyeonggi. Oh said he used to prescribe the medicine to more than 40 children per day.

“Now, it is considered lucky to prescribe herbal medicine to two kids per day,” complained Oh. “As red ginseng extract for children became popular, the demand for herbal medicine decreased by a huge amount.”

Acupuncture is the only treatment that has remained buoyant. Almost 80 percent of revenue for oriental clinics comes from acupuncture treatment.

The future looks even harder, especially because the number of oriental doctors doubled in the past ten years, from 8845 in 2000 to 16,038 this year.

“If the coverage of National Health Insurance extends to include more parts of oriental medicine,” said Kim of the Association of Korean Oriental Medicine, “it will not only greatly raise the health standard of the Korean people but also help shrink the number of oriental doctors dealing with financial burdens.”