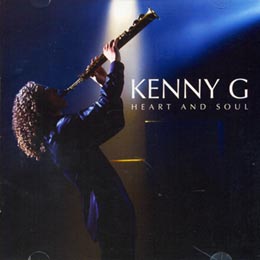 Kenny G wanted to get back to his roots with his new album “Heart and Soul.”

Or so he says in a special note inside his 13th major studio album. “Heart and Soul” is supposed to replicate that special feeling he gets when he thinks back to his high school days, when he started to enjoy music. And that music was R&B.

The album definitely evokes the feeling of some of his classics from the 1980s and ’90s, but the addition of R&B elements don’t detract from his style.

That’s because the multiple Grammy-award winning jazz musician collaborated with R&B heavyweights Robin Thicke and Babyface on two songs - “Fall Again” and “No Place Like Home,” respectively - and even added some R&B-style beats to several tracks on this CD. If you’re not an R&B fan, don’t let this detract from a well-composed album. Most of the music, including the title track, “Letters from Home,” “G-Walkin’,” and “After Hours,” is smooth and clean - stuff that time-and-again makes Kenny G’s work seem effortless.