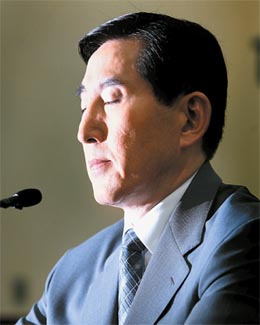 In his National Assembly confirmation hearing yesterday, Cho Hyunoh, the National Police Agency commissioner- designate, apologized to the public for “causing trouble with his thoughtless remarks.”

The conference room of the Public Administration and Security Committee erupted in camera flashes when a grim-faced Cho entered the room at 9:52 a.m. for a 10 a.m. hearing.

“I didn’t mean to insult Mr. Roh. My words were meant to encourage riot police officers to sternly enforce the law ahead of illegal street rallies.”

The media reported this month that Cho gave a lecture to police officers in March in which he said that former President Roh committed suicide last year after he discovered a large slush fund in bank accounts under different names. In the same lecture, Cho said the media should refrain from reporting minute details about the grieving families of the 46 sailors who died in the Cheonan sinking in March, whom he described as wailing like “animals.”

Cho apologized again yesterday to the families of the killed sailors.

Cho, who is currently Seoul’s police chief, has been pilloried by Roh’s family, his supporters and the relatives of the sailors. They demanded that President Lee Myung-bak drop Cho’s nomination. While the Cheonan families met Cho on Friday and accepted his apology, Roh’s family and the Roh Moo-hyun Foundation requested the prosecution investigate Cho for defaming the former president.

Tension in the hearing escalated when opposition Democratic Party lawmaker Choe Kyoo-sik asked whether Cho’s apology signified that the slush fund didn’t exist, or whether he was apologizing for disclosing it.

Cho didn’t respond, which angered DP lawmaker Baek Won-woo, who stood up and shouted, “Why can’t you spit it out?”

Committee head An Kyung-ryul of the Grand National Party told Baek to be seated and the hearing resumed.

Baek verbally attacked President Lee and his wife at Roh’s funeral in May last year. As the couple approached the altar with flowers, Baek ran at them and shouted: “Don’t lay the flowers! How dare you come here! You have murdered Roh in political retaliation!”

Roh committed suicide after being investigated for bribes allegedly received by family members and aides. His supporters said the investigation by the ruling party was politically motivated.

When asked whether the National Assembly should appoint an independent counsel to investigate his remarks on Roh’s slush fund, Cho declined to comment and maintained that he was not in a position to address the issue.

“But I will cooperate if the independent counsel is launched and begins an investigation,” Cho said.

Prosecutors will soon summon Cho regarding his March remarks on Roh.