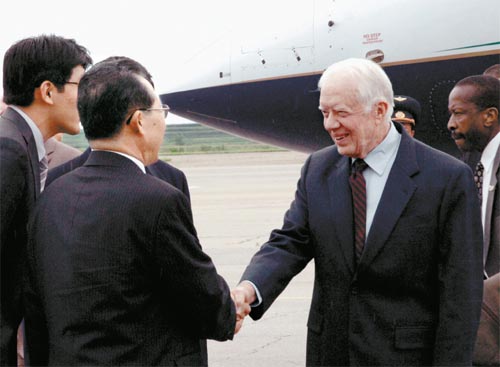 
Former U.S. President Jimmy Carter arrived in North Korea yesterday, according to the North’s Korean Central News Agency, on a quest to rescue a U.S. citizen detained in the authoritative regime - and a possible underlying mission to bring a shift in the political mood on the Korean Peninsula, according to analysts.

The U.S. government neither confirmed nor denied Carter’s trip. The Ministry of Foreign Affairs and Trade also declined to comment. “We have no information about it delivered from the U.S.,” said a ministry official.

According to KCNA, Carter met last evening with Kim Yong-nam, who is the nominal head of North Korea, but no details about their meeting were available at press time.

Carter’s flight occurred only a few days after reports surfaced that the U.S. was considering sending a high-profile envoy to secure the release of Aijalon Mahli Gomes. Gomes, a 31-year-old American who once taught English in Pocheon, near Seoul, was sentenced to eight years in jail in April for illegal entry into North Korea in January.

According to sources interviewed by the JoongAng Ilbo, Carter’s visit has been planned and calculated for weeks by the U.S. government. And the visit, which the U.S. government stresses is humanitarian in nature, hides other political purposes, the sources said.

The sources said the U.S. decided early this month to send Carter at the request of the North. The dispatch of a team of two medical doctors to the North from Aug.11 to 13 was to highlight Gomes’ medical condition and make an excuse for Carter’s visit. Earlier, the Associated Press reported that North Korea had agreed to free Gomes if Carter visited.

The sources said the North wanted Carter, not other envoys, because it sees him as the most suitable figure to help ease international pressure on the country after the deadly sinking of a South Korean naval vessel in March.

Carter met former North Korean leader Kim Il Sung in Pyongyang in June 1994, and played a crucial role in reducing tensions on the Korean Peninsula. The U.S. and North Korea signed an agreement in October 1994 in which the North pledged to give up its nuclear weapons program. The North followed up on the promise and shut down its nuclear reactor, until it withdrew from the Non-Proliferation Treaty in 2003. In return, analysts said, Kim Il Sung earned the international legitimacy he needed to plan a succession of power to his son Kim Jong-il. Kim Il Sung died only a month after Carter’s visit.

Carter’s second visit to the North, and possible first meeting with Kim Jong-il, could help Kim anoint his youngest son, Kim Jong-un, as his successor. Kim is reportedly seriously ill, and medical experts predict his death within several years.

Economic aid could be another by-product of the visit. During his first visit, Carter hinted at U.S. assistance and then-President Bill Clinton carried through with economic aid, helping Kim Jong-il stabilize his power during a serious famine. Carter won a Nobel Peace Prize in 2002 for mediating international conflicts, including the Korean one.