Yet another twist in Oh ordeal

Yet another twist in Oh ordeal 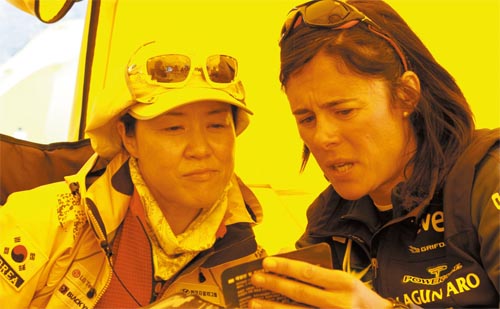 Oh Eun-sun, left, speaks with Edurne Pasaban of Spain at the Annapurna base camp on April 4. [YONHAP]

The controversy swirling around Oh Eun-sun’s claim to have successfully reached the summit of Kangchenjunga is not going away anytime soon.

And now a new complication has arisen: The climber and her primary sponsor aren’t necessarily on the same page when it comes to addressing the issue.

Oh’s sponsor said it is planning to send the 44-year-old climber on another expedition to the mountain’s 8,586-meter (28,169-foot) summit to put the controversy to rest, characterizing it as an attempt to verify her claim of having scaled Kangchenjunga in May of last year rather than a re-try.

“Oh successfully reached the summit of Kangchenjunga. There’s no doubt about it,” an official with Black Yak, which sponsors Oh, said in an interview with the JoongAng Ilbo.

Kachenjunga sits on the border between Nepal and Tibet. Some observers dispute Oh’s claim to have reached its summit in May 2009. [JoongAng Ilbo]

“However, since there are many people questioning the validity of Oh’s feat, we will put to rest such claims by sending her on another expedition to prove that she reached the summit. Oh will need time to prepare, and considering her physical conditioning at the moment it seems likely that she will go sometime in the first half of next year.”

The only problem with the plan?

Oh - who has had to defend her claim of having reached the summit of 14 of the world’s highest peaks, which measure over 8,000-meters above sea level - doesn’t appear to be on board.

“I have not said that I would go on another expedition to verify my claims,” Oh told the JoongAng Ilbo yesterday after the Black Yak official’s comments. “I have no intention of doing so.”

Oh is refusing to hold formal in-depth interviews at this point and has decided to delay a press conference that was to take place sometime this week.

“I thought a week would be plenty of time to prepare, but I will need more time,” Oh said. “I need to gather more evidence to defend myself. I felt the need to prepare more thoroughly, so I’ve decided to hold off the press conference for the moment.”

If Oh does indeed embark on a second expedition to the top of Kangchenjunga, she would not be the first Korean to make such an effort to clear up a controversy. Male climbers Um Hong-gil and Park Young-seok went on second expeditions to verify their claims as well. Um went on his second expedition up Shisha Pangma in 2000 and Lhotse in the Himalayas a year later, while Park reached the summit of Lhotse a second time in 2001.

Oh laid claim to the throne of the women’s climbing world by announcing that she had become the first female climber to scale the world’s 14 highest peaks after reaching the top of Annapurna on April 27, 2009. However, some observers - including rivals such as Edurne Pasaban of Spain - said a photo Oh claims to have taken at the peak of Kangchenjunga is suspect. American Elizabeth Hawley, 86, the most respected record-keeper on climbs in the Himalayas, has Oh’s ascent of Kangchenjunga listed as “disputed” in The Himalayan Database.

The controversy has continued over the past week. An investigative program on television network SBS - which aired on Aug. 15 - introduced new evidence that seems to poke holes in Oh’s claims to have reached the summit of Kachenjunga.

Last Thursday, a Korean Alpine Federation-organized panel of veteran climbers met to discuss the issue, concluding that they did not believe Oh had reached the summit of Kangchenjunga.

With the latest turn of events in Korea, Pasaban - who claimed in May of last year to have reached the summit of all 14 mountains - has said she would like to be officially recognized as the first woman to accomplish the feat.

“This confirmation (by the KAF) eases my mind, as it shows that it’s not only me who is disputing Oh’s claims,” Pasaban was quoted as saying in an interview with Agence France-Presse. “What I can say is that I climbed the 14 peaks of more than 8,000 meters and that I have provided proof.”

Pasaban went on to state that Hawley of The Himalayan Database would “take some kind of position on this.”