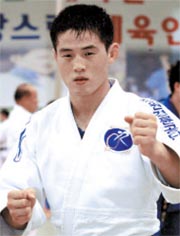 The 30-year-old judoka has rediscovered the joys of training after a lengthy slump.

Since winning the gold medal, when he won all his matches by way of ippon - a full decisive point that wins a match - Choi failed to show the same type of dominance in the last couple years.

But Choi is hard at work these days to make up for lost time. He has his eyes firmly set on the 2010 World Judo Championships, held in Tokyo starting Sept. 9.

A period of decline, which usually follows after a successful outing at the Olympics, was a lot longer for him than he ever expected.

Choi became a household name after his gold medal performance in Beijing.

He had to attend a slew of promotional events, which cut into his training time, and he is still mired in a dispute with his agent over the earnings from an instant ramen television commercial. Choi’s performance on the mat began to suffer as a result. A competitor in the 60-kilogram division, Choi has to shed seven to eight kilograms. For a fit and muscular world-class athlete, attempting to lose such weight before major tournaments can be a painful experience.

“When things did not go the way I planned, it became difficult for me to focus on judo,” said Choi.

Aside from all the distractions, Choi had been hampered by a cartilage injury in his right shoulder and was eliminated in the round of 32 at the 2009 World Championships in Rotterdam, Netherlands. In need of a break, Choi requested to train outside the National Training Center in Taeneung, northern Seoul.

“I needed to maintain a level of fairness with the other athletes on the squad,” Jung said. “But I gave in and decided to trust Choi based on his work ethic.”

Once away from the national team and its grueling training sessions, Choi focused on rehabilitation. He read books and watched movies on his time away from training. Fully rejuvenated, Choi returned to the National Training Center this March.

“Even at the 2008 Summer Games, I think I merely focused on using my strength,” Choi said. “I now see my opponent’s movements better and have a new-found love for the sport.”

The lingering pain in his right shoulder has also subsided and he no longer has to push himself through tough weight-loss sessions. Although Choi’s natural weight was at 68-kilograms in the past, it has dropped to 64. And after training sessions he weighs in at ideal 62.5-kilograms.

This means Choi is in top shape.