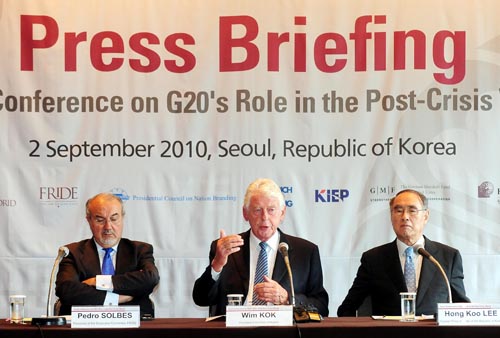 Pedro Solbes, left, of a think tank in Madrid, Wim Kok, center, president of the Club of Madrid and former prime minister of the Netherlands, and Lee Hong-Koo, former Korean prime minister, at a press conference yesterday. [NEWSIS]


A special conference in Seoul focusing on the upcoming G-20 Summit ended yesterday with the adoption of recommendations for a successful hosting of the summit, which will be held in Seoul in November.

Former presidents and prime ministers exchanged views with members of the Korean G-20 Presidential Committee. The recommendations were delivered to President Lee Myung-bak.

The conference took place at Shilla Hotel in Seoul from Sept.1-2. The conference was co-hosted by the Presidential Council on Nation Branding, the Ministry of Foreign Affairs and Trade and Club of Madrid. The official sponsor was the German Marshal Fund of the United States.

Among the recommendations adopted were focusing on the legitimacy and efficiency of the G-20 and the reform of quotas at international financial institutions.

The panel emphasized the importance of strengthening the role of G-20 as a premier forum in order to achieve strong, sustainable and balanced development after the global economic downturn. It also suggested that the G-20 Seoul Summit address urgent issues such as reform of the IMF, and establishment of a global financial safety-net.

“The focus of the summit has been on the recovery from the economic crisis, but the upcoming Seoul summit will take a future-oriented and long-term approach in solving global problems we face today,” said Lee Hong-Koo, former prime minister of Korea.

The panel welcomed Korea’s initiative to include the issue of development as one of the G-20 agenda items. The Seoul G-20 Summit will be the first one chaired by a non-G-8 country and it is a unique opportunity to enhance the organization’s credibility, the panel said.

As a model of miraculous economic growth, Korea will play a pivotal role in helping other developing countries, the panel concluded.

“Monetary assistance alone is not sufficient in helping underdeveloped countries to overcome extreme poverty. We should provide substantial assistance, such as capacity building mechanisms, in order to contribute to the betterment of the international community,” said Han.

Han also said, “We are in the midst of transforming world order and the Korean government has adopted low-carbon green-growth as a new paradigm and the issues of climate change will be discussed at the G-20 Seoul Summit.”

The issue of legitimacy and representation were on the table. The panel suggested that the G-20 formalize relationships with other international organizations and develop effective communication with non-G-20 member countries and ordinary citizens.

“We had a very productive and fruitful conference this time,” said Wim Kok, President of the Club of Madrid. “I am very impressed with the tireless efforts and dedication of the Korean government. This conference lays an important foundation for the upcoming G-20 Summit in November and Korea will represent the voice of Asia.”