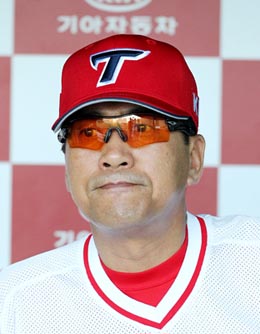 Asian Games baseball squad manager Cho Beom-hyun and a panel of technical committee members announced the final 24-man roster for the Korean team yesterday - and the list is loaded with players from the SK Wyverns.

Cho and a group of advisers, including former national team manager Kim In-sik, trimmed its preliminary 63-man list down to 24 after a lengthy meeting at Korea Baseball Organization headquarters in Dogok-dong, southern Seoul.

The second-largest contingent will be from the Kia Tigers with pitchers Yoon Seok-min, Yang Hyun-jong and outfielders Lee Yong-kyu.

Choo Shin-soo of the Cleveland Indians and Kim Tae-kyun of the Chiba Lotte Marines were the only overseas players selected to the squad, while right-handed pitcher Kim Myung-sung of Chung-Ang University was the only amateur player selected.

Eleven teams will compete in the baseball event at the 2010 Asian Games with Korea, Taiwan and Japan tabbed as the early favorites to reach the medal rounds.

“We assembled the best team possible with the goal of winning the gold medal,” Cho said to the media yesterday.

One of the biggest factors in the selection process was whether players who have not been exempted from their two-year mandatory military service should be considered. Ten players, including the 28-year-old Choo, have yet to serve their mandatory military service. With baseball excluded from the 2012 and 2016 Summer Games, the upcoming Asian Games is the best opportunity for the young players on the squad to earn exemptions.

Current government rules state that national team members competing at the Asian games can only earn exemption from military service if the team wins gold.

Outfielder Choo was the only player in the American League to hit .300 with at least 20 home runs and 20 RBI in 2009 and became the first Asian player ever to do so. Choo will turn 30 before the next Asian Games and will have to earn his exemption this year in Guangzhou, China.

Eleven players from the 2006 World Baseball Classic squad - which finished as the runner-up to Japan - and 14 players from the gold-medal winning team at the 2008 Beijing Summer Olympics were exempted from military service.

The national team starts training Oct. 25 and is expected to depart for Guangzhou on Nov. 10.