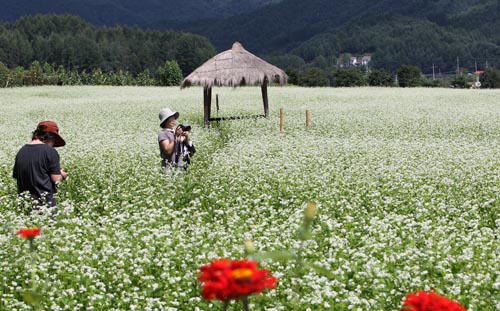 Sept. 17: Internationally renowned violinist Richard Yongjae O’Neill and violist Stefan Pi Jackiw are performing with the London Philharmonic Orchestra, which is celebrating its 77th anniversary this year. This will be its eighth performance here since its debut in Korea in September 1969. Vassily Sinaisky is one of the most important Russian conductors of the latter half of the 20th century.

Sept. 18: Korean band Crying Nut and Japanese band Doberman come together for their first concert together in Seoul since 2008. The two bands have been touring Japan on their Asian Rock Bus Tour since June. They will be joined by Korean Rock Band and Galaxy Express for their concert in Seoul.

The concert celebrates the 40th anniversary of “The Korean Senior Citizens Association.”

Sept. 28: American-born singer Rose Jang is visiting Seoul for a concert featuring musical theater and pop opera favorites. Jang reached No. 1 on the domestic and international music charts with her performance of “Memory” from the musical “Cats,” topping versions recorded by both Celine Dion and Barbara Streisand.

To Oct. 31: This play, presented by both the Chungmu Art Hall and EMK Musical Company, is based on the play “Renai Gikyoku” by Japanese playwright Kokami Shoji.

The story follows a female playwright who asks her producer boss out on a date. When her boss rejects her advances, she writes a series based on what might happen if he had said yes. As time goes by, the producer starts to have feelings for the writer and the writer’s imaginary love story starts to look like it might come true.

Performances start at 8 p.m. Tuesdays, Thursdays and Fridays, 4 and 8 p.m. Wednesdays, 4 and 7 p.m. Saturdays and 4 p.m. Sundays. There are no performances on Mondays.

Sungjwa, one of Korea’s best theater companies, is producing a Korean version of this classic one-act comedy by English dramatist Peter Shaffer, the author of numerous award-winning plays. The play, which premiered in 1965, is about a group of characters who are literally in the dark following a blackout in their building. The stage lights are lit throughout the show - meaning we can see the characters but they can’t see one another.

To Sunday: Korean playwright Oh Tae-seok re-imagines Shakespeare’s treasured play “The Tempest,” by mixing it with tales from the “Samguk Yusa,” or “Memorabilia of the Three Kingdoms” to create a uniquely Korean version of the classic.

Performances start at 8 p.m. Tuesdays through Thursdays, 4 and 8 p.m. Fridays and Saturdays and 4 p.m. Sundays. There are no performances on Mondays.

Tomorrow to Sunday: Clowns clown around at a circus, mimes make eerily inventive impressions in the theater or on the street, but the clown mime is a special breed of artist who combines the best elements of both forms.

Festival participants include Duo Cappuchino from Russia, Acrobuffos from the United States and Yui from Japan.

Sept. 22: To celebrate Chuseok, Korea’s harvest holiday, Korean folk musician Kim Young-im is holding an encore concert to follow his Parents’ Day concert in May. The name of the concert - which Kim has been doing for 15 years - is “Hyo,” which means filial piety.

The performance is a musical with Korean music, drama and dance.

From Saturday to Nov. 20: The title of this year’s biennale is “Living in Evolution,” based on the idea that art, in all its various forms, has contributed to the intellectual evolution of the human race. The artistic director is independent Japanese curator Takashi Azumaya,

The main exhibition features more than 160 artworks by 72 artists from 23 countries.

There will also be several special exhibitions, including one called “Now, Asian Art” featuring Korean, Chinese and Japanese artists.

Venues are located around the city.

To Sept. 30: The high-tech development called “Tomorrow City” in Incheon’s Songdo neighborhood is an appropriate setting for this festival of futuristic art. Festivalgoers can either view the exhibits from a distance or participate as artists and creators who contribute to the many interactive works in this show. Exhibitions include Mobile Art, Blur (architecture), Wave (light and sound), Nine Scenery (public art project) and Sense Senses (featuring emerging Asian media artists).

The program also includes workshops on the intersection of art and technology.

To Friday: Classic and modern films are being screened at major theaters and art houses around the capital during the nine-day Chungmuro International Film Festival Seoul, which opened last Thursday.

The festival - named after the Seoul district that was once the center of Korea’s film industry - will screen 115 films from 30 countries.

The closing film is “Hot Summer Days,” directed by Tony Chan and Wing Shya from Hong Kong. It follows seven stories during the hottest summer in Hong Kong history as the soaring temperatures spark intense emotions. It will be screened at the National Theater of Korea’s Haeoreum Theater.

General admission is 5,000 won. Tickets for the closing ceremony are 10,000 won and must be reserved online.

Check the Web site for film times and locations.

To Sunday: The city of Anseong in Gyeonggi Province was the origin of the namsadang, a group of wandering entertainers during the Joseon Dynasty (1392-1910). Baudeogi was a legendary female namsadang leader.

The festival grounds will be transformed into an ancient Joseon-era marketplace, which will serve as the backdrop for more than 200 festival events, including namsadang performances and plays, a massive street parade with some 5,000 participants and folk performances by troupes from six countries, including the Philippines, Ukraine, Cyprus, Taiwan and Mexico.

To Sunday: Anything wrong with your mind, body or spirit? Chances are ginseng can sort it out, and Geumsan is the place to find it. Every year since 1981, the region celebrates the healthy root with a wealth of exhibitions, hands-on activities and entertainment.

Festivalgoers can participate in a variety of activities related to ginseng. Oriental medicine practitioners will show people how to squeeze, cut and harvest ginseng roots, and will provide information about herbal remedies. Cooks will provide samples of a variety of Korean dishes that count ginseng among their ingredients and a ginseng cooking competition will be held to find the best new dish. There will also be performances, concerts and visual arts displays.

To Sunday: Lee Hyo-seok (1907-1942) was one of the most famous Korean novelists of the 20th century and is best known for “The Buckwheat Season,” one of the most anthologized pieces of modern Korean literature.

Lee’s hometown of Pyeongchang, Gangwon, is famous for gorgeous buckwheat flowers that blanket the land in the fall.

The festival offers performances of traditional folk plays, concerts of traditional and modern music and dance, writing contests and opportunities to sample foods made from buckwheat flour made in the region.

Tomorrow to Sunday: The 12th Wonju Hanji Festival celebrates the beauty and versatility of hanji (Korean traditional handmade paper) with exhibitions, workshops, educational programs, events and seminars at venues in and around the Chiak Art Center.

The main event is a fashion show held tomorrow featuring clothes made of hanji.