Golfers from Korea and Japan pose for a picture after the opening round of play on Friday in Seogwipo, Jeju Island. [YONHAP]


Any time Korea plays its archrival Japan in an athletic competition, it raises the intensity of the competition between the two sides to a fever-pitch level. In a hotly contested tournament - pitting the two rivals for the first time in six years and for only the second time ever - the Korea-Japan Professional Golf Team Match (Sept. 10-12) ended yesterday with Japan narrowly edging out Korea with a record of 10 wins, one draw and nine losses at the Haevichi Country Club in Seogwipo, Jeju Island.

On the final day of competition featuring single match play, Korea started the day trailing its opponents with a record of four wins, one draw and five losses. By drawing even, notching five wins and losing five, Korea fell short of winning the event on home soil.

In the one-on-one competition in which the player with the lowest score after 18 holes wins the matchup, Kim Dae-sub led off with a win over Ryuichi Oda, but Kim Hyung-sung, Kim Bio, Kim Do-hun and Lee Seung-ho combined for four consecutive losses. Son Jun-sub gave Korea faint hope by defeating Daisuke Maruyama but Kim Dae-hyun lost in the following match. Kang Kyung-nam added a win for Korea but the win came a little late for the home side to muster a comeback.

On a positive note, both Kim Kyung-tae and Bae Sang-moon earned wins against the opposing team’s top golfers, Ryo Ishikawa and Shingo Katayama. 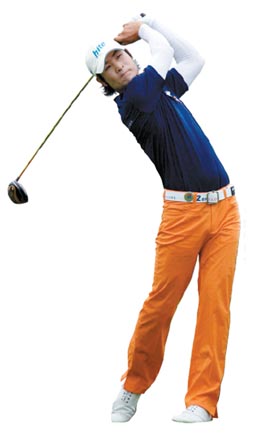 Kim Dae-hyun and Kim Dae-sub started competition by easily winning the opening match over Koumei Oda and Ryuichi Oda. The two sides exchanged wins until Ryo Ishikawa and Shunsuke Sonoda shot three under par, 69 to down Lee Seung-ho and Son Jun-yub and take the first day of competition.

On the following day, Korea’s Bae Sang-moon and Kang Kyung-nam partnered up to defeat Ryo Ishikawa and Sunsuke Sonoda to end the day with the record of two wins, one draw and two losses.

Despite the effort, Korea came up short of defending its win from the inaugural team match between the two nations held in 2004.

At the 2004 event, Yang Yong-eun connected on a long putt to clinch the victory for Korea.

“I don’t see the team match as a chance for me or the other players on the squad to take revenge against Japan,” team captain Han Jang-sang stated prior to the start of the tourney.

“Golf is a gentlemanly sport and if one approaches the game with excessive greed, it can bring about adverse effect on his game.”

The friendly competition between the rivals provided for an entertaining and close-fought event which should provide golf fans with something to look forward to for years to come.