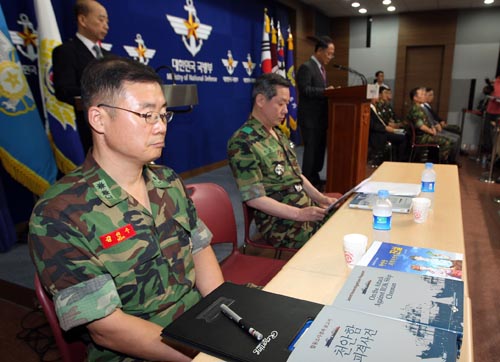 Books with the title “Joint Investigation Report: On the Attack Against the ROK Ship Cheonan” are displayed yesterday during a media briefing at the Defense Ministry in Seoul. The Cheonan, a ship that was believed to be torpedoed by North Korea, killing 46 sailors, sank March 26 off Baengnyeong Island, near the disputed sea border with the North. [YONHAP]


South Korea yesterday released a full report into the deadly sinking of a warship blamed on North Korea, saying it was acting to quell “groundless” suspicions about who was to blame for the tragedy.

The Ministry of National Defense report comes in at about 300 pages and reaffirms conclusions reached in May by international investigators that a torpedo attack by a North Korean submarine sank the ship and killed 46 sailors.

The South announced reprisals after the initial report was published, including a partial cutoff of trade, triggering an angry response from the North, which continues to deny responsibility.

Many South Koreans are also skeptical. A survey by Seoul National University’s Institute for Peace and Unification Studies showed that only three in 10 trust the findings of the international inquiry.

The 1,200-ton warship was split into two on March 26 near the tense inter-Korea sea border off the west coast, in one of the divided peninsula’s deadliest incidents in decades.

Investigators from the United States, Sweden, Australia and Britain, as well as South Korea, concluded in May there was overwhelming evidence that a torpedo attack was the cause.

Russia sent its own experts to Seoul for an independent investigation but has not made the results public.

“Even within the Republic of Korea [South Korea], the reality is that there are individuals who raise doubts about the investigation results based on their own interest, and they are taking irresponsible actions such as spreading groundless accusations,” said the report.

It gave detailed technical explanations and evidence related to the sinking.

The defense ministry said it published the report “to inform Koreans and the international community of the truth, and to resolve unnecessary misunderstanding and suspicions.”

It said it would distribute the report to the press, National Assembly, government agencies, embassies and academic groups at home and abroad.

The aim is to let North Korea and the international community know “that even the most covert attack leaves evidence and especially sends a solemn warning to North Korea not to engage in any further military provocations,” the ministry said.

The incident dealt a further blow to cross-border ties that became strained after the conservative government in Seoul took a more hard-line stance on Pyongyang.

The South has staged a series of military drills - either alone or jointly with its U.S. ally - as a show of strength against the North.

Pyongyang threatened retaliation for the drills, calling them a prelude to an attack.

But in an apparent easing of tensions this month, the North returned a South Korean fishing boat and its seven member crew seized Aug. 8 and requested flood aid from its neighbor.

The South’s Red Cross said Monday it would send rice and cement.

The North also suggested resuming reunion programs for families separated during the 1950-53 war.