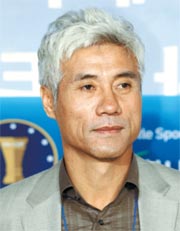 Seongnam Ilhwa will have an unlikely group of fans rooting for them at the AFC Champions League semifinals second-leg match against Al-Shabab tomorrow night.

The outcome of the game could have a significant impact on Jeju United, which sits atop the K-League standings and will be watching the game closely.

Seongnam Ilhwa lost its first-leg match 4-3 but if it manages to win the second-leg match and advance to the finals, the K-League playoffs will be pushed back a week.

That could allow Jeju United to use two 2010 Guangzhou Asian Games national team members, Koo Ja-cheol and Hong Jeong-ho, in the K-League finals.

But even if the national team manages to advance to the finals in Guangzhou, China, on Nov. 25, the two players will still be able to join Jeju in time for the first leg of the finals on Dec. 1.

“It is difficult for us to play without Koo and Hong in the lineup,” said Jeju United manager Park Kyung-hoon. “I will be rooting for Seongnam Ilhwa to advance to the AFC Champions League finals.”

However, if Seongnam Ilhwa fails to advance to the AFC Champions League finals, it could be difficult for Koo and Hong to play in the postseason. If the national team fails to make it to the Asian Games final, the two players will be limited to playing for Jeju United in the second-leg match of the finals.

In an ideal situation for Jeju United, Seongnam Ilhwa would advance to the AFC Champions League finals and Jeju would defeat FC Seoul, which has the second best record in the league.

Jeju United is currently ahead of FC Seoul by two points in the league standings as of Monday. Although Jeju has played one more match than FC Seoul, its upcoming matches against Daegu and Incheon United should be easier than the Oct. 27 match against FC Seoul, making them the favorite to finish the regular season first overall.

“The best-case scenario would be for the two players to win a gold medal at the Asian Games and play a pivotal role in the K-League playoff finals,” Park said. “In order for that to happen, we must also win our Oct. 27 match against FC Seoul.”

Said Koo: “I had no idea that the playoff schedule could change depending on Seongnam Ilhwa’s AFC Champions League match. Now that I know, we must win our game against FC Seoul and also win the Asian Games in order to play in the K-League finals.”

Koo and Hong, both 21 years old, were both integral members of Hong Myung-bo’s squad, which reached the quarterfinals of the 2009 U-20 World Cup in Egpyt. Koo has also been a regular on the senior national team of late, scoring two goals in nine appearances.

Hong has established himself as a key player on Jeju United’s defense in his rookie season this year. He recently earned a spot on the starting lineup in the Oct. 12 friendly against Japan.