A landmark to call our own

A landmark to call our own 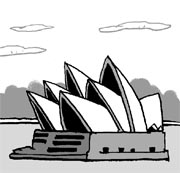 Francois Mitterrand, who in 1981 became the first socialist president of France, spearheaded large-scale projects to upgrade and modernize the Louvre Museum. Most controversial was a plan to construct a glass and metal pyramid - designed by Chinese-American architect I.M. Pei - in the main courtyard, a move that created a public uproar. Changing the main outdoor entryway to the museum, many locals believed, would spoil the classical beauty of the buildings that contain 800 years of French history and culture.

But the project went ahead as planned, and the glass pyramid made its public debut in 1989, which marked the bicentennial of the French Revolution. The world lauded the 21-meter-high (69 feet) glass pyramid featuring more than 600 glass panes, praising it as a successful merger of the old and new.

Mitterrand racked up many social and political achievements during his 14 years in office, including the abolishment of capital punishment and European integration. The most prominent among his accomplishments was his “Grands Travaux” policy to cement France’s cultural leadership by encouraging the design and construction of new buildings. The effort consisted of about a dozen major architectural projects in Paris, including the Louvre Pyramid; L’Opera Bastille; La Grande Arche de la Defense, a huge white marble arch; and La Bibliotheque nationale de France, the national library.

Each one is now a landmark and has come to symbolize the city. Mitterrand strongly believed that architectural works and monumental buildings reflect the greatness of the people. In 1985, he delivered an impassioned speech on architecture at the Sorbonne. “Culture and economy are the two sides of the same coin. Investment in culture is the same as investment in the economy,” he said.

Although he faced political trials, Mitterrand did not change his architectural policy. There was criticism that he had a pharaoh-complex, as he seemed obsessed with building monumental buildings. However, a large number of tourists swarm Paris even today to see the landmarks built during his term.

Every truly international metropolitan city has a least one landmark. New York City has the Empire State Building. Shanghai has the Oriental Pearl Tower. Sydney has the Opera House.

But what about Seoul? We have Namsan Tower and the 63 Building, which aren’t exactly the most stunning or impressive structures. The fact that we don’t have anything else to offer in terms of landmarks is embarrassing.

The plan to build an opera house on Nodeul Island in the Han River has hit a major roadblock, and its future is uncertain. But if we truly want to become an international city, shouldn’t we ensure that Seoul has some kind of impressive landmark that heralds its arrival on the global stage?