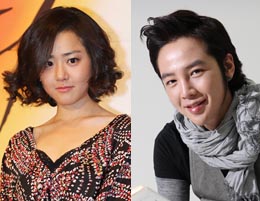 Moon Geun-yeong and Jang Geun-seok have been cast in KBS’s new romantic comedy “Mary Stayed Out All Night.”

Moon plays Mary, the daughter of a failed businessman, who becomes involved in a love triangle with Jang’s character, who is the lead singer in a band.

The story is derived from the online cartoon of the same name by Won Su-yeon.

The show is scheduled to start in mid-November.