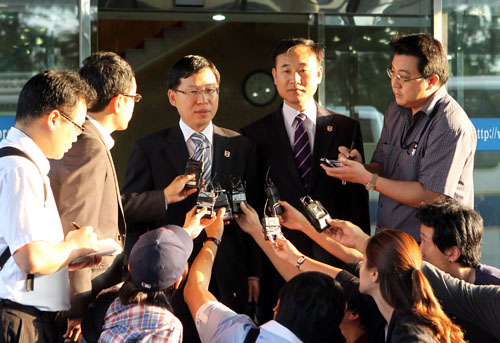 South Korean Red Cross officials talk with reporters yesterday before they head to Kaesong for talks on reunions for separated families. [YONHAP]

Working-level talks between North and South Korea about the reunion of separated families made minor progress yesterday, but a second round of talks was scheduled for next Friday.

The two Koreas clashed on the exact venue for the reunions.

During the first session of talks yesterday at Mt. Janam, Kaesong, which started at 10:30 a.m., thirty minutes later than planned, North Korean Red Cross officials stated that the reunions should be held within the Mt. Kumgang tourism complex.

Pyongyang sealed off the reunion center when it decided to seize the South’s assets in April in retaliation for South Korea’s refusal to restart cross-border tours.

The unification ministry said that the two parties had come to an understanding on the dates for the reunions, which are likely to be held from October 21 to 27, as North Korea suggested. The South’s Red Cross delegation initially had asked the reunions to be held from October 19 to 24, but the North wanted a day off between two three-day reunions, said the government source.

The South also requested that the reunions be held more often and on a larger scale due to the advanced ages of the reunited family members.

“North Korea should be open to regularizing the reunions on a humanitarian basis,” Unification Minister Hyun In-taek said yesterday during a speech in Seoul. Kim Eyi-do, head of the South’s Red Cross delegation said before crossing the border yesterday morning, “We can no longer procrastinate on the family reunion issue.”

However, North Korea was unyielding on the number of family members to attend the next round of reunions: 100 from each side and was quoted by the unification ministry to have said that “regularizing reunions was something to discuss on a higher level of talks after inter-Korean relations have eased.”

Both delegations failed to reach agreement on the venue after a second session of talks that started at 3:45 p.m. and lasted 15 minutes.