A prince and his longtime lover

A prince and his longtime lover 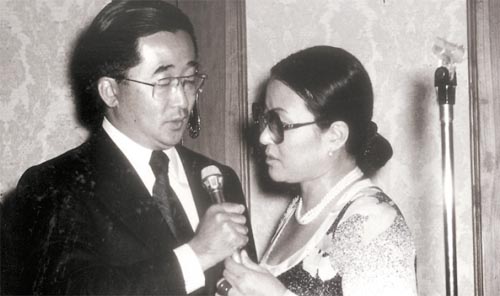 Yi Gu and Yu Wi-jin sing at a social gathering in the early 1970s. Provided by Jean Art Gallery


It was a love story, hidden for years between a man who could have been His Imperial Highness, Crown Prince of Korea, and a woman he met at a party.

Finally, the tragic love story, which lasted years, has been unveiled by the adopted son of that woman.

Yi Gu was a grandson of Gojong, the twenty-sixth king of the Joseon Dynasty and the first emperor of the Korean Empire. The prince was born in Japan during the Japanese colonization of Korea (1910-1945). He was born in Kitashirakawa Palace, now known as Akasaka Prince Hotel, the same place where he died of a heart attack in July 2005.

His father was Crown Prince Eun of Korea, and his mother was Princess Bangja (1901-1989), a Japanese princess. 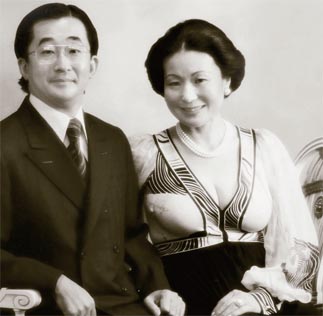 Yi Gu and Yu Wi-jin pose in the early 1970s. The photo was found among the articles left by Yu after her death.

Yi Gu studied architecture in the United States and returned to Korea in 1963 - after the fall of former President Syngman Rhee, who was hostile to the royal family - with the help of the new president, Park ChungHee.

Yi Gu and his mother then moved into Changdeok Palace, where he lived the life of an architect and a businessman.

That’s when he met Yu, and their love affair began.

Their love story, which was hidden for nearly 30 years, came to light after Yu passed away last month at the age of 79.

Yu had been director of the Jean Art Gallery, one of Korea’s first commercial galleries, in the 1970s. For 40 years, she managed the gallery on her own as a single woman, unlike other female directors of other galleries of that time. She was an affable woman who liked to wear hats and bright-colored clothing.

When Yu’s obituary was published, including her family background, people were shocked to find out Yu had a son named Yu Jae-eung, who is currently the executive director of the Jean Art Gallery.

It was the talk of the town and rumors from the past were resurrected.

People wondered if the long-forgotten love story between Yu and Yi Gu was true and the son was the reason of the love affair. But the assumption was misleading.

When Yu was alive, she registered her brother’s son in her family register and was training him to be her successor.

“It’s finally the right time to tell the love story of Yu and Yi Gu,” said Yu Jae-eung, while coming back to the gallery after his adoptive mother’s funeral. The son believed the story too heartrending to keep hidden - although his mother had been tight-lipped about it.

He said that their love story has a pitiful historical shadow over it, and that it would be an insult to both Yu and Yi Gu if Yu is known as Yi Gu’s “live-in girlfriend.”

The couple was deeply in love with each other, and shared pain and agony toward tragic Korean history. And Yu Jae-eung believed people should know the truth behind what just seems to be a hopeless love story.

Yu’s youngest sister, Yu Min-jeong, 70, and the current vice president of Jean Art Gallery, recalls the two lovers’ first encounter. They met at a frequently held culture-related meeting. Because Yi Gu’s spoken Korean was poor, he easily initiated conversation with Yu, who was fluent in Japanese.

Sometime thereafter, they fell in love.

Although they found the love of their lives while in their 40s, they valued every minute of their time.

“My sister was a heavy smoker,” said Yu Min-jeong. “But as soon as Yi Gu wrote a letter saying that she should quit, she threw her cigarettes out. My sister’s diary, which she wrote in every day, is filled with conversations she had with her lover.”

She also said Yi Gu designed the interior of the Jean Art Gallery and was responsible for renovating it, not to mention constructing Yu’s house in 1979. As if trying not to forget a single trace of her lover, Yu forbade the renovation of even a single part of her house or the gallery.

“A few days ago, you were in my dreams,” it says in part of a love letter written by Yu to her lover. “I guess you are missing me as much as I miss you. And I promised myself not to interrupt you as I know how much you are enduring to focus on your work while being apart from each other.”

Yi Gu was was frequently out of the country on business trips and thousands of love letters were exchanged over the 10 years of their love affair.

“Jin, I love you,” Yi Gu wrote back. “You’ll never imagine how much I am missing you, even more than you miss me. Let’s endure a bit more.”

Yi Gu called Yu by the nickname “Jin” or “Jin sama.” It is said that the prince’s mother was also fond of Yu. She would take Yu along to numerous social events and call her softly by her name.

Yu was also polite to Princes Bangja and respected her like a mother-in-law.

Many people wonder why the couple never married.

Although Yi Gu said he would divorce his former wife, Julia Mullock, a German-American woman eight years his senior, he hadn’t yet gone through the legal proceedings. So legally, they were still married.

To make matters worse, Yi Gu had to fly immediately back to Japan to obey his mother’s calling when there were financial troubles in 1979. Slowly, the two lovers lost contact. There were rumors saying Yi Gu remarried a rich Japanese woman but Yu didn’t believe a word of it. She wrote letters and made phone calls to a man who was never found. Yu even visited Tokyo several times in hopes of finding her lover, but she returned alone.

“She wrote how much it hurt, not hearing from Yi Gu, in her diary,” said Yu Min-jeong, who has been by her sister’s side all these years. “She wrote that it tore her apart, but she never showed any sign of a broken heart nor did she ever have tears in her eyes.”

Yu repeatedly said, “He’s going to come back,” as though she was making an incantation.

“As far as I know, Yi Gu’s mother called him back to Japan to force him to marry a rich Japanese woman so the family could recover financially,” she said.

Indeed, Yu’s longing for Yi Gu continued until the last days of her life. About 20 days before Yu’s death, she told her family that “Yi Gu was in my dream, holding his hand out asking me to come to him.”